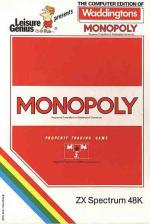 MUCH OF MY misspent youth was devoted to playing Monopoly. It was never long before the board was awash with beer and property cards littered the floor. When the banker got bottled we all went to bed.

Leisure Genius, in its official version, has done its best to depict board, dice and deed cards. Up to six people can play, or the computer can control as many players as you wish.

The top two-thirds of the screen depict the board in 3D perspective over which the crudely drawn pieces move, often resulting in frightening colour clashes. Names are absent too, so you have to know the board by heart.

Much better is the scrolling bird's eye view which takes place below. As the pieces move the relevant squares march from left to right.

As you can't see what cards you or the other players hold, you have to call up the property menu to remind yourself that you really were foolish enough to buy the Electric Co. The same applies for finding how little money you have left.

Trading is a farce. You must pinpoint the property you want to exchange, and the one you wish to gain, using a cursor which moves across the board. Again, as the squares are not named, you must remember exactly where your properties are, otherwise you will attempt to trade a property you might not even hold.

Trading between two computer controlled players is virtually never successful, as the computer will offer ludicrously small cash incentives - £141 for Mayfair, in one instance.

Buying houses and hotels is disappointing. As they do not appear on the board, you can't gloat over your row of terraced slum dwellings crowded on the Old Kent Road.

Just about the only reason for playing computer Monopoly is if you are a lonely addict adrift amongst inveterate Trivial Pursuiters. Beating the Spectrum offers little solace, however. And it's very boring.

Just about the only reason for playing computer Monopoly is if you are a lonely addict adrift amongst inveterate Trivial Pursuiters. Beating the Spectrum offers little solace, however. And it's very boring.