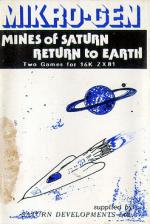 Two simple adventure-type programs on one cassette. The format of both is the same - a series of situations followed by the question "What will you do now?" - but the scenarios are slightly different.

In Mines of Saturn, you have to pick up "Di-Lithium Crystals" in order to refuel your spaceship, which has made a forced landing on Saturn.

Return to Earth is the sequel, in which you have to find your way round a deserted earth Station to try and alert Earth of your predicament.

I was entertained by the display of my spacecraft and Saturn while the program was loading. Sadly, once the game proper had begun, that was the last I saw of them.

The program wouldn't accept a lot of my proposed solutions, but got full marks for politeness, responding with "pardon?" to suggestions it did not understand.

Though I found no bugs as such, there was some evidence of bad design. For example, at one point I was offered, and accepted, a boat, only to find that the only way to proceed was upwards! Well, it did say a *light* boat.

Though I found no bugs as such, there was some evidence of bad design.