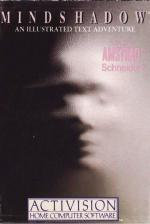 Something of a surprise, this game. The Cowled Crusader first delved into its mysteries when it came out on the Commodore 64 as a disc-only release. Although it had a number of good points, it never seemed to really catch on - so it's a very pleasant surprise to see it running on Arnold.

At the beginning of the game, you find yourself on a desert island, a place that you'd be forgiven for thinking was rather familiar. Desert islands seem to be a popular location with adventure programmers, but in Mindshadow there's a twist - the island is only the stepping-off place for a tour of numerous locations around the world as you try to work out what the game is all about - very necessary because you're not given much in the way of hints, except that your mission is, initially, to find out who you are...

However, the best things about Mindshadow are the graphics, the inputs, and some unusual playing options. The graphics are excellent - almost full-screen, with a scrolling text window beneath. They draw quickly and add considerably to the game, to the extent that in some locations you will need to examine them carefully to check the contents of a location.

Input is complex but straightforward - in other words, you can give things to people, perform multiple commands, and so on. The latter facility is most useful when combined with movement, so by entering N,N,E,N,S you coud quickly cross five locations to reach your desired destination (providing, of course, that you'd already mapped the relevant area).

Unusual options include the "Think about..." option, which allows you to ponder some of the trickier puzzles and occasionally gives some insight into the situation. Then there's a large bird who answers your cries for 'Help' (if you make them). This extraordinary vulture-like creature - supposedly a condor - appears on screen bearing words of wisdow which, unfortunately, don't usually help at all! Finally, there's something called the 'living tutorial', which is simply a guide to playing adventures. I say simply, but it is in fact highly comprehensive and certainly of great use to novice players. The advice it gives covers many adventuring skills and would be of help in solving any game - not just Mindshadow. Unfortunately, there was some doubt at Activision as to whether they would be including this file on the tape when it goes on sale.

Mindshadow is an excellent game. With approximately 80 locations, advanced players may find it slightly too easy, but it exudes programming professionalism and is well worth a look. The Pilgrim, for one, looks forward very much to Activision's next adventure release.

With approximately 80 locations, advanced players may find it slightly too easy, but it exudes programming professionalism and is well worth a look.