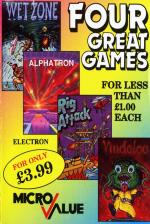 Towards the end of the Eighties, Tynesoft, like many 'big' software houses, repackaged and rereleased many of its earlier full priced games as compilations. Volume 1 of its Four Great Games series is from a set of three entitled "Microvalue"; each volume packaged in a twin cassette box and costing £3.99.

All the programs contained on each compilation are natty arcade machine code affairs. Considering some of them retailed at up to £7.95 each before, Tynesoft rightly emphasise that you now get Wet Zone, Alphatron, Rig Attack and Vindaloo for less than a pound each!

Getting stuck in then, Wet Zone really is a spaceship extravaganza like no other invaders-type jaunt. You fall from the top of the screen and before you've even made it to the bottom, are attacked by 'images of childhood in Graemsay'. Whoaboy, is this game hard!

The 'images' are things like submarines, umbrellas and snow flakes that whirlpool down upon you from left to right, firing bullets into the bargain, at the 20 degrees diagonal. This makes them both very hard to blast and to avoid - as by the time bullets reach where the lifeforms were when fired, they've already moved further down!

On hitting them, your bullets take time out to 'ripple' and, as only two bullets/ripples are permitted on screen at once, prepare for frustrating deaths while waiting to be able to fire again. Also, as the 'images' reach the right, they appear again on the left so it's not uncommon to be surrounded by bullets and avenging aliens.

Wet Zone is pure hardened arcade addicts' action with great sound and swift gameplay. The sprites, done in Mode 4, aren't all that brilliant but there is a funky tune between games to make up for them.

In Alphatron, you pilot a Scout Ship assigned to protect a Refinery from missile attacks. The action is viewed from the side and you begin on a launch pad, blasting off when a missile appears screen-left.

Cruising off the right in pursuit of the missile, note that there are another four separate screens in which to take care of it, with the refinery on the far right of the last. A nice backdrop of cyan sky and red hills doesn't distract from this 'action', such as it is, and a radar of the five screens in the bottom left displays both hills, your position and that of any missile. With the title at the top of the Mode 5 screen and a fuel gauge, high score, your score and lives all displayed lower, Alphatron is graphically impressive.

Although the instructions note your ship is equipped with a laser, firing is more bullet-like and takes a time to reach the missile. To destroy one, you need to blast off, follow it onto the next screen, aim and fire. You miss more often than you imagine as IF the missile reaches the right of the screen, it disappears onto the next one - but your bullet doesn't follow it any further. Also, your aim needs to be spot on otherwise the bullet causes no damage whatsoever!

The playability of this game is dull and it ploughs on and on until the refinery is destroyed or you blow up enough missiles to move on to the next level, where things speed up a little. Not the best of the bunch as the sound is also pretty poor.

On then to Rig Attack, a brilliantly designed helicopter jaunt across BP-owned rigs. This is a simple game where you pilot a multi-coloured helicopter sprite equipped with short range bombs to deal with the "enemy submarines", which are also superbly designed. The playing area fills the whole of a Mode 1 screen and you begin on an intricate oil rig with three submarines to seek out and bomb. As they're underwater, you need to fly down low over it - without hitting it as this is fatal! - while avoiding their long range bombs and timing your shot perfectly!

As you reach the left or right of the screen, the whole thing scrolls visibly in the appropriate direction presenting you with new and just as intricately designed oil rig territories. You must also remember which have helicopter pads on as you will need to take some time from hunting to refuel. There are nice noises and explosions to accompany the action and often a frantic slide towards water if you forget!

The only real niggle with this game is that once you've worked out the best strategy for playing, it becomes too easy, never increasing in difficulty as the submarines always only attack one at a time (even when you must destroy more to complete the level).

Finally, you become an Indian Takeaway owner on a quest to find your toilet after a little over-Vindaloo-indulgence. This scenario doesn't suggest it but there is more than a little familiarity about this title.

Encased in a stylish border with a nicely styled title between two curry houses, all overlooking the majority of the screen's playing area, Raj (your character) must traverse twenty two rooms of bouncing balls, bugs, wriggling and disappearing platforms, elevators and other nasties using only the Z and X keys.

He begins "Under The Takeaway" in the top left and must be guided to the bottom of the screen by walking along earth and platforms, dropping slowly down through any spaces to the one below. That is, unless he collides with anything moving and disintegrates.

Many elements of the game such as the score increasing in time to sound blips marking the character's descent, the layout of the scores, bonus and room name (and even the font this is typed in!) - not to mention the screens themselves and the standardised five lives - smack of Icon's Bug Eyes. Indeed, Jason Sobell was the author of each! [Bug Eyes in 1985, Vindaloo in 1986 - Ed]

With just ten screens in Bug Eyes, it's unfair to say Vindaloo is the same game with an altered scenario and different sprites! However, the more you compare the two, the bigger are the number of similarities that become apparent. One screen (number six on each: "Squidged Flat" on Bug Eyes and "Skull Level Four" on Vindaloo) is almost identical!

Overall, although Vindaloo has some nice touches seen when pausing the game or viewing the ridiculous room names ("Life Is An Orange"?), the palette, sprites and layout choice distinguish Bug Eyes as a classier act. Playability of both is high, especially with a MRB.

With the possible of exception of Alphatron, the games on this compilation are of a very high standard. Despite only being available on the tape format, they take very little time to load and are completely bug-free and well thought out. Recommended.