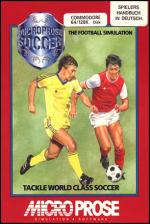 Up until now quality football simulations on the C64 have been few and far between. Apart from Ocean's Match Day II and the five-year old International Soccer there's been precious little for C64-owning footy fans to shout about. All that, however, is about to change. Programmed by Jon Hare, Chris Yates and Martin Galway, collectively known as Sensible Software, creators of Parallax, Wizball, Shoot-'Em-Up Construction Kit and the initially titled Sensisoccer, Microprose Soccer looks set to become the definitive sport simulation on any computer.

Unlike most other games in the genre, Microprose Soccer allows you to play football at every imaginable level, from friendly six-a-side matches played on an indoor pitch right up to the tournament that forms the main part of the game: the World Cup itself!

Conversions of Microprose Soccer are currently underway to all popular formats, and the PC version is looking particularly tasty. Seeing as the original is such a great game, we should expect to see some damn good 16-bit versions. Here's hoping...

Up to sixteen human players can enter into the World Cup, and each must choose which country they wish to represent from a list of 29 before play can begin in earnest. Once teams have been selected, the remaining ones are put under computer control and the first round begins. Matches between two computer controlled teams don't actually take place on screen. Instead the final score is calculated at random and displayed automatically by a click of the fire button. This goes on until a player's team is 'called up' for a match. When it is, it's time to take joystick in hand and kick off against whoever you've been drawn against, be it a computer team or one represented by another player (if it is, both take the field in a two-player match).

When the match begins, it becomes apparent exactly why Microprose Soccer is different. Instead of the usual (and tired-out) method of displaying the game side-on, with the pitch scrolling horizontally, Microprose Soccer gives you a direct bird's-eye view of the match, while the pitch scrolls in all four directions, so only a small section is shown at any one time. This, plus the bird's-eye viewpoint gives an impression remarkably similar to Taito's World Cup coin-op.

The control method couldn't be simpler or more effective. Out of the eleven players in your team, you can only directly control one at a time: the one nearest the ball. Dribbling the ball becomes automatic as soon as it is in possession, while the fire button will kick the ball in the direction you're facing. The length of time that the button is depressed determines the power of the kick. There are several different types of kick, each one accessed by certain joystick actions executed immediately before kicking the ball. For instance, centring the joystick before the kick results in a high lob, while a diagonal movement executes a spectacular banana kick. There's even a bicycle kick that sends the ball flying back over your head and bewildering any defenders!

If the opposing team gets possession of the ball, it can only be recaptured with a sliding tackle. Pressing fire will send your player skidding across the pitch in an attempt to win the ball. If you time it right, you can knock the ball away from your opponent and recapture it. If you miss, you simply slide right past, wasting valuable time. Should the opposing team get within close range of your goal area, a buzzer sounds and control is handed over to your goalie. As usual he can move anywhere within his area, and pressing the fire will cause him to dive for the ball.

Corners, throw-ins and goal kicks all feature in the game, as does the weather! From time to time (usually when you least expect it) there'll be a clap of thunder, a flash of lightning and it'll start to bucket down, accompanied by some excellent sound effects. But it's not just an effect. The rain makes the pitch slippery, and so mis-timing a sliding tackle in the rain could well send you spinning out of control right across the pitch!

A special mention has to be made of the excellent replay feature. When a goal is scored, the last few seconds of play leading up to the goal are replayed in slow motion, and even crackly tape rewind effects and interference have been incorporated to make the whole thing look realistic. It's an excellent idea and one that's extremely entertaining in practice.

As mentioned earlier, there are several other kinds of game to play. Practice and friendly matches can take place on a smaller indoor pitch that scrolls in just two directions, and there's also an international soccer challenge that pits you against sixteen foreign teams methodically, from the walkovers such as New Zealand and Oman to the real powerhouses, Italy and Brazil. Beat both of them and you've really got something to boast about!

I was overwhelmed by Microprose Soccer. It's undoubtedly the best football game ever produced and even puts the superlative Epyx series of sims to shame for sheer playability! It's also one of the most user-friendly programs I've encountered. The duration of the matches can be changed, as can the strength of the banana kicks and the colour of the players' strips. The attention to detail is flawless. The players jump for joy when a goal is scored and the aforementioned action replays are just brilliant. Martin Galway has provided some excellent tunes and effects to accompany the action and the graphics rate as some of the best defined the C64 has ever seen. All in all, Microprose Soccer is without doubt one of the greatest C64 games to date, and I don't expect we'll see anything as good as quite some time to come. Miss it at your peril!

Without doubt one of the greatest C64 games to date.