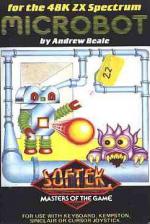 Andrew Beale has done a number of games for Softek and this one will probably be accounted as among the best. It has similarities in its scenario with the 'you're inside this computer' school.

In this, possibly your millionth re-incarnation now, you are a microbot, a miniaturised robot, whose task is to enter the electronic brains of proper-sized robots and repair damage to them.

The scenario points out that you wanted to be either a Brain Surgeon or a truck driver, and as you couldn't possibly meet the necessary specifications, you had to become a Brain Surgeon!

A nice touch about this game is that the inside of these highly advanced but somewhat brain-damaged robots resembles the basement of some huge and rambling Victorian mansion with unlagged heating pipes.

There are two types of pipe - purple ones and green ones (scenario explains the difference, but it's all far too high in technology to repeat here) and there are various bugs which are causing damage to the delicate electronic brain. Despite their varied shapes they come in two hues - blue and yellow (this is important, but wait for it).

Your job as microbot is to prowl around armed with repulsa blobs and fix the pipes. The repulsa blobs keep the nasties at bay for a mo, but lying around in each brainy chamber are blue and yellow fix-a-rive blobs.

Touching one turns microbot into that colour, and if he fires a blob of the correct hue at a nasty of the same colour, the blob will destroy it. But despite all these fun and games, the true nature of the coloured blobs is to fix the pipes. When fired close up a blue blob will fix a damaged purple pipe, and a yellow blob fixes a green pipe. Once used the fix-a-tives are instantly replaced ready for picking up again.

The brain consists of twelve chambers, and can be seen to the left of the playing area in plan form. This scanner also informs you of where the worst damage is being done by colour coding.

'Fixing holes in the pipes made by the nasties is not so easy, I found that this only worked if you bumped into the hole several times and then fired the fix-a-tive ball at point blank range. The graphics are very good with a number of animated bugs (there's a yellow Pac Man on legs in there somewhere) the game is fine, but there was something about it that made it not as much as It could be. Just a feeling, it's still a good and interesting game and highly original.'

'Graphics in Spectrum games have got to be so good in the last few months that it's easy to forget how primitive they were only recently. In Microbot the scenery is mostly angled pipes on black, quite simple, yet they are very good pipes. You wouldn't have seen pipes like those only a year ago! The creepies are good, too, and well animated. Microbot himself moves swiftly, but getting the hang of the game techniques takes some time, and could have been explained better. I shall certainly go back and get better.'

'Nice large graphics and very smoothly moving. Not too sure about the overall qualities of the game - it grew on me with playing, but I get the feeling there aren't quite enough objectives Involved to make it very addictive, although it is fun to play. I got a bit irritated with the finickiness of fixing holes, and it seems a pity that the blue and yellow blobs can only be fired sideways when the damned bugs move all over the place. An original game.'

A good and interesting game and highly original.