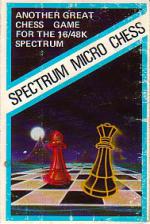 Spectrum Micro Chess is Artic's other new chess game for the Spectrum and is, as far as I know, the only version available for the 16K machine.

Despite memory limitations it is well presented and easy to use, keeping to all the standard chess rules. Moves are entered by giving the row number and the column number; all illegal moves are simply ignored.

There is only one level of play, and response time is fast. But it plays a weak game - I once beat it in 36 seconds and seven moves.

Several nice features have been included. There is a 'help' option, in which the computer makes your move for you, and a clock is displayed at the top of the screen. The graphics are well designed, though it is a bit of a strain on the eyes to play on a magenta and cyan board.

Thorough instructions are given on the cassette box inlay, and on loading you are given the option of watching a demonstration game. In this, you are asked for an opening move, and the computer then plays both sides - entertaining to watch. Micro Chess would make an excellent chess tutor; a shame that it is such a weak player.

An excellent chess tutor, but a shame that it is such a weak player.