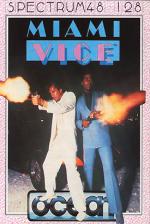 Once again those cool trendsetters, Crockett and Tubbs, try to find time in their hectic schedule for a spot of police work. Armed with revolvers and a shiny new lotus (no tacky Granada with a flashing beacon on top for these trans-Atlantic coppers), they set out to put the world to rights and clean up those mean and dirty streets. In fact Crockett and Tubbs don't seem to rough it at all and probably while away the time at stake-outs comparing their designer clothing.

Anyway, it looks like Crockett and Tubbs are going to actually have to get down to some real work. The ignominious Mr J., a gangland smuggler, is expecting another shipment of illegal substances any day now. This is no paltry shipment, its street value is estimated at around one million dollars. Crockett and Tubbs must race around Miami and try to shatter the smuggling network while bringing the baddies to justice.

In order to put the squeeze on this network, you start at the bottom by intimidating the minions; those men who are so hard up they'll croak on the others for a paltry 10 dolllars. If you manage to bribe the right information out of these guys you may be able to seek out the suppliers and hassle them until you work your way through the entire organisation and eventually break it.

Once you have picked up the car you can proceed to explore the town, keeping an eye open for any suspicious goings on. Control of the car takes some getting used to, the acceleration is very quick but the brakes are not quite so enthusiastic. The inhabitants of APACHt4 Miami are predictably reckless on the road. They seem to have absolutely no regard for anyone else and persistently drive their cars into yours, even though they must be able to see you coming. When this happens a large amount of Crockett and Tubb's energy is lost. Walls are not very friendly either, and if you hit them or stray off the road onto the grass verge, then your car goes "puff" and some more energy is lost.

Because the city is full of buildings, the ones where you're most likely to interrupt a meeting between the crooks are named. If you want to explore one of these meetings then stop the car outside, press fire and push left on the joystick.

You are now free to roam around inside. Timing in quite essential in this game, as you should only visit one of these buildings while a meetings is in progress. If you're too early then the crooks will see your car outside and scarper. If you're too late then they will have gone.

When a crook is captured you must take him to City Hall where he is interrogated. If the interrogation is successful then you will earn lots of extras points.

The game is over when Crockett and Tubbs capture the crooks and successfully bust Mr J.'s network.

I don't ever watch the TV series so I can't compare the two, but if they are similar, then Central TV can't be doing very well. This game is bad. The graphics of the cars are totally unrealistic (unless cars have started altering dimensions while they turn comers, that is). The game is very quiet, but the background scenes are reasonable; they contain lots of colour, and are nice to look at; exactly the opposite of the rest of the game. Miami Vice is the Skoda of the games world - no, that's a bit strong...

My goodness. Ocean haven't half turned out a load of unplayable twaddle here. Miami Vice must be one of the most unplayable games of the year. The way that you control your car is ludicrous and takes at least half an hour to get used to. The stage where you look for the baddies is not done very well at all. Miami Vice just doesn't contain enough to be called addictive - bad try, Ocean.

I thought that the Zzap team were being unduly harsh on Miami Vice, however, after seeing it on the Spectrum I could only laugh. If you liked the series, then don't play this game as it may put you off it forever. The game is exceedingly annoying to play as your car is very difficult to control. The graphics are dodgy and the backgrounds are drab. The sound is also useless, there are no tunes and effects are rarely used. On the whole I haven't seen a game as dire as this in a long time.

Other Spectrum 48K/128K Game Reviews By

I haven't seen a game as dire as this in a long time.