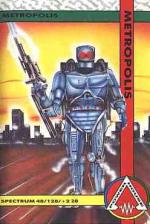 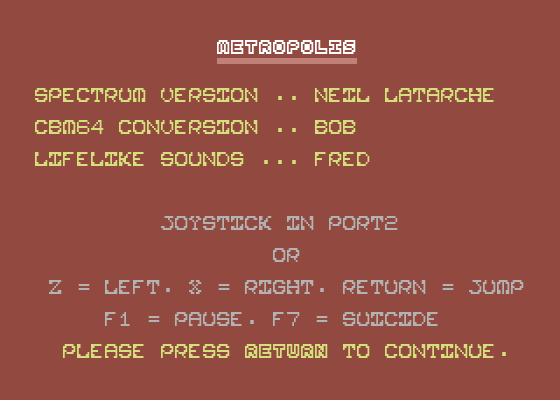 People sometimes go to barmy lengths to conceal the fact that they've pinched an idea for a game. This one, for instance, is supposedly all about stranded astronauts searching for fuel for their spaceship. Pah! I know a rip-off of Magic Knight when I see one!

In truth, gentle readers, Metropolis is naught but a spacified version of David Jones' excellent trilogy for Mastertronic. Here, the put-upon hero, Moonboots, wears a spacesuit instead of armour, and is attacked by aliens instead of demons, but the idea's the same; make your way through dozens of chambers, avoiding attack and searching out the objects which will open locked doors and help you return to your home.

The backgrounds aren't bad, though there's precious little explanation of what chandeliers, suits of armour and Gothic pillars are doing in an alien metropolis! What lets the game down are the sprites; single coloured and very poorly designed, they don't dome near the standard you'd expect, even from a budget game. At some stages the white astronaut disappears in front of the white background details. 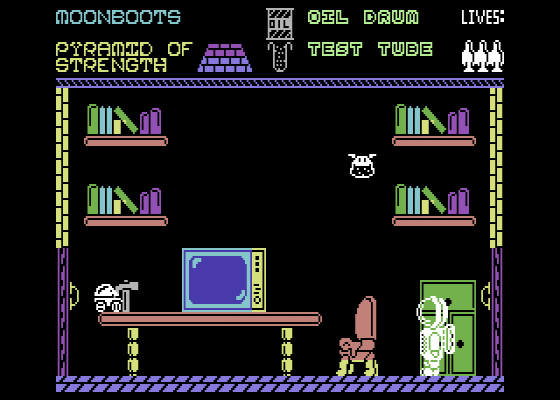 The sound effects stink too; apart from an irritating "Boink Boink" from some of the bouncing aliens, here's precious little in the way of aural excitement.

Fortunately, the gameplay isn't that bad. Above the playing area is your "Pyramid of Strength", which decreases on each contact with an alien. To the right is your inventory, which never stretches beyond two objects. Each time you find a new object - an oil-can, hammer, key or whatever - it is automatically added to your inventory, and the last object dropped. By juggling objects in this way you should be able to find which will open the locked doors which bar your way.

Each time you lose a life you turn into a flying jelly (I didn't quite understand that bit!) and, at the end of the game, you're told what percentage of the adventure you've completed. An amiable little game, then, probably entertaining for a good few hours but let down by some sloppy graphics and sound design.

An amiable little game... Probably entertaining for a good few hours but let down by some sloppy graphics and sound design.