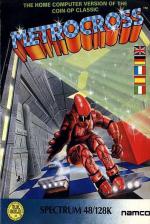 You are in a race against time across a chequerboard floor... and hazards like potholes, hurdles, tumbling crates, Coke cans and rats get in your way and can cause you to stagger, tall and lose time. Land on a green square, and you're all but brought to a halt.

But you can gain extra energy by jumping accurately onto springboards, landing on skateboards or kicking green cans, and hurry toward completing one of the 24 levels before time runs out.

Points are scored for every three squares moved in this conversion of the famous Namco arcade original, for swapping skateboards and for passing beneath a bridge at the end of a stage. Kicking blue cans also earns you points, and jumping on them stops the timer for two seconds.

Metrocross is one of those games which is easy to play and understand but gets increasingly difficult as you progress further - and, believe me, It does get difficult avoiding such obstacles as barrels, hurdles, and my favourites, the rats. Sound is nonexistent apart from the odd beep as you jump obstacles, but the graphics are pretty good. My only niggle is that on the inlay it speaks of green and blue cans - how on earth do you tell which is which on a monochromatic screen? Apart from that, Metrocross is enjoyable to play, though Interest may wane as you learn the patterns of obstacles - but even then you can race against the clock.

The first six levels of Metrocross present no challenge whatsoever, and than the next level appears to be completely impossible. The graphics are reasonable, though I wondered why the cars, specified on the title screen as being green and blue and all that, were in fact the same colour! No, Metrocross costs far too much, and no-one could say they really found it addictive. It's good for a few plays, though.

As coin-op conversions go this is a real winner, with all the thrills and spills of the original arcade machine - and you don't have to keep feeding it with 10p pieces! The only difference is the sound. The graphics are pleasant to look at, monochromatic with just the walls at the top of the screen changing colour - my only grudge is that there's a colour clash when you go near the wail. Metrocross is packed full of playability, and you'll soon be addicted, though it's a little overpriced.

Metrocross is packed full of playability, and you'll soon be addicted.