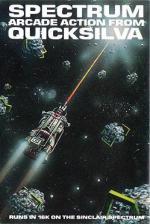 Quicksilva's Meteor Storm is a game for the 16K Spectrum and their version of Asteroids. If you're one of those who belittle the "beep" on the Spectrum, this program will make you sit up and listen. Never mind the Japanese fifth generation computers, the Spectrum does it already - it talks to you! Admittedly it helps if you amplify the sound and you know what it's going to say ("Meteor alert!"), but it is intelligible and a remarkable feat of programming even if it does sound like a Dalek with a sore throat.

There are three sizes of meteors: the smaller ones worth more points, and if you clear one lot even more appear. Your controls are "6" for anti-clockwise and "7" for clockwise, "8" is hyperspace (a random jump to somewhere else on the screen, which can be used repeatedly). "9" is thrust and "0" is fire, which has no auto-repeat, so fortunately this game also has the "hold" and "start" feature on Intruders, allowing you to rest on your finger.

Bonus points can be won by knocking out the enemy saucers which appear from time to time and start shooting at you. There is a slow-moving large one and a quicker small one, both of which look remarkably like raspberry pies! Every 10,000 points scored results in a noise which sounds like someone treading on a piglet's trotter, and more importantly you get a bonus ship.