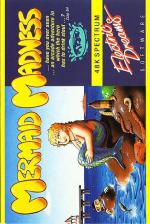 Mermaid Madness is an arcade action type game from Electric Dreams Software. You are a mermaid called Myrtle and you see, and fall in love with, a diver called Gormless Gordon. Unfortunately, Gordon does not see you in quite the same way and tries to escape your clutches by diving off the end of the pier. You dive off in search of him, only to find that he has stuck himself under a sunken wreck. You have to rescue him and dodge sea monsters and the like.

Myrtle's source of energy is the bottles of stout that she finds lying about the sea floor as she makes her way through the many caverns. She also finds objects that are useful to her such as lamps to light dark caverns. The graphics for these are very well drawn but they tend to merge as one object nears another (for example - a lobster approaching Myrtle too closely changes her hair from yellow to purple). The graphics also tend to flicker a lot which can be a strain on the eyes.

There are a few well thought out additions to this rather unoriginal game which increase its playability. One such is the picture of a beating heart at the top of the screen which beats faster as Myrtle gets nearer her beloved. Another is the story written on the instruction sheet to start you off. These show that Electric Dreams have tried to make their game original in concept, if not exciting.

However, after saying this, the game is anything but original. Games like this one have been produced for years. It is not very exciting either - learning all of the tricks of getting past monsters without being eaten can become tedious after a very short time. The tune 'Hall Of The Mountain King' plays after each game too which somehow reminds me of Manic Miner, even though it is nowhere near as well produced.

If you want a game for cuteness and not lastability I would recommend this one.

If you want a game for cuteness and not lastability I would recommend this one.