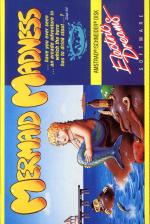 Graphically this game is very impressive indeed and stars one of the weirdest computer characters you could ever hope to encounter, namely Myrtle the Mermaid. She's a stout-swilling, man-chasing, sea-dwelling, 112-year-old mound of heaving flesh, intent on rescuing the unfortunate Gormless Gordon from a watery grave.

The action starts with a very overweight, naked blonde chasing a diver off the end of a pier and diving into the water, and she sprouts a tail in the process. From there your task as the mermaid is to find the diver again and release him before his oxygen supply runs out. Finding him involves getting past many deadly sea creatures and solving some puzzles.

You can swim around the delightful underwater screens and also walk on an outcrop of land in the search. In the water the mermaid has a nicely animated swimming action, while on land she looks like Cyril Smith breakdancing. You're quite buoyant with all that blubber so you may find control a little awkward, particularly when trying to squeeze past creatures in tight corners.

The sea creatures appear on most screens and vary from sharks to jellyfish and sea-horses. They're all nicely drawn and like the scenery very colourful. Every time you bump into them the level of stout in a bottle goes down. It's fatal if it empties completely. Since you have only one life this is pretty serious, but there are replenishing bottles left lying around. Some animals will kill you instantly; you have to find these by trial and error and steer well clear of them.

You can carry one object at a time and need to use it to clear obstacles from your path or to solve problems. For instance it's fairly obvious what you do with dynamite but where should you use it and what do you need on a completely dark screen? The problems are fairly simple but with one mistake proving fatal, it may take a little while to crack some.

As you get closer to Gordon, a heartbeat on screen gets faster but for the most part there isn't much exploration to be done, just a lot of experimentation.

The graphics are certainly the best thing about the game. The gameplay is harmed by frustrating situations in which the mermaid gets stuck against a creature or dies instantly after a lot of hard work. However despite those reservations, it looks good, sounds good and will present an enjoyable challenge for a while.

The controls on this one are so cumbersome and so frustrating, you could be forgiven for giving up altogether. You wouldn't miss that much if you did either. The 'Wally' games handled this kind of puzzling much better, and they look pretty tired now. Great graphics don't make up for weak gameplay.

You can see okay, but the graphics are a lot less appealing.

P. Very colourful graphics and good animation.
P. A good dose of humour.
P. A novel setting and implementation of this kind of arcade adventure.
P. Should take a while to crack completely.

N. Controls can be very frustrating when encountering creatures.
N. Not enough depth to the puzzles.

Good graphics, but the gameplay is harmed by frustrating situations in which the mermaid gets stuck against a creature or dies instantly after a lot of hard work.