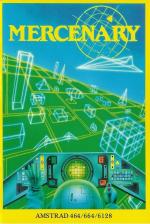 Deep among the snowdrifts nothing stirred but a lone, intrepid programmer battling the elements to get from Reading to Somerton. What dragged him out in the awful weather on January 14? Only what looks like being one of the big games of 1987, that's all.

The game, called Mercenary, subtitled Escape from Targ, is being converted to the Amstrad by Dr. David Aubrey-Jones. He's been working on the conversion for well over six months. If you need any proof of his pedigree, he was the man responsible for Tornado Low Level and that amazing smooth scrolling.

Mercenary is impressive. So impressive that an early version of the program was given a rave 'review' a month ago by another Amstrad magazine despite several crucial elements of gameplay being missing.

The copy of the game the brave doctor mushed through the elements to show us was still incomplete, but he expected to have it finished by early February. So you can hope to see it in the shops in a few weeks. You play the mercenary who has crash-landed on the planet Targ. Despite the opportunities to pursue your profession and make money on a war-torn planet, this is just a means to your true end: escaping from the planet. To do that you've got to get hold of a craft that can cope with intergalactic travel - after all, your last one's buried its nose in Targ's dirt.

A single city represented by a network of roadways and numerous vector-graphic buildings forms the major part of the game. But outside it are other objects including a space station. You can make your way around on foot, but to really appreciate the game's graphics and sheer scale you need to hop into the first available 21st-century flying machine and explore properly.

The vector graphics are excellent and fast-moving, and although the view is often quite bare, you really do get the feeling of moving round a real world. This is enhanced when you take an elevator below ground and explore the underground complexes where most of the game's puzzling goes on.

On the preview version this was all great fun. But it lacked the star of the show: Benson, your computer. Benson, we are promised, will keep you updated on what's happening through scrolling messages on screen, with a cheery beep and a cutting wit. He also controls the planet's defences, so the preview version didn't allow us to try out any fighting with the planet's other ships. They should come after you when you start bunging missiles at their buildings.

The adventure element looks quite tricky. But Benson is crucial to that too, so we'll have to wait and see just how tough it is. There's no doubting the graphics will be superb. And with the hope of a possible disk version containing a whole second section to the game, it looks like a very promising debut for Novagen on the Amstrad.