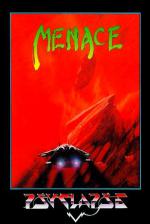 Picture the scene: the courtroom of the great Galactic alliance - and the leaders are anxious. "The forces of the planet Draconia are becoming restless," they say. "It's only a matter of time before they come and destroy us. We have chosen you to fly a daring and dangerous solo mission into the heart of the Draconian system to destroy their world."

You ask: "Why? Is it because I'm such a fantastic pilot?"

"No," they reply. "It's because you're the only one stupid enough who doesn't think that he's Napoleon."

Weeeell, that's what it amounts to really isn't it? Why else would you be going to a deadly planet alone?

Soon you are off to attack Draconia, armed with a single-pulse laser pod and a matter converter. The matter converter allows you to blast debris, formed by destroying a whole enemy attack wave, to form weapon and power systems (listed below).

At the end of each level a huge monster appears that needs to be shot, oooh, loads of times to be killed. If you do manage to kill this 'menace' (Ha ha! OK, maybe not. Ahem!) then the next level is loaded and you must continue to do death with the next set of meanies.

Can you fight your way through to the end of the sixth zone and destroy the 'Brain' of Draconia? Or will you just poo your pants and run away?

Despite being blessed with nice graphics, Menace on the Amiga was a rather simple blasting game which should have converted well to the C64.

However, something has been lost in the translation. The first thing that strikes you is the surprisingly weak presentation, which adds very little in the way of atmosphere, not to mention the slow and tedious multi-load.

The game itself is rather poor, lacking the necessary frenetic quality that a shoot-'em-up needs. The pace is lacking partly due to the fact that to compensate for the lack of aliens there is a huge gap between formations to make the levels longer.

Rather a cop-out in my view. Menace isn't a completely crap game, it's just that it's not good enough to stand out in the already crowded world of quality shoot-'em-ups.

I had an inkling that Menace would be a might disappointing when it was necessary to type in RUN to get the title screen to appear.

Not the most user-friendly loading system in the world! When the game did finally appear I can't say I was overly impressed. Visually it's half-baked, even to the standard of leaving black blocks around the edges of the foreground graphics.

The gameplay is dull and unrewarding, so that even when you do complete a level you think "So what?!" Where is the pace? Where is the excitement? Where is the tension? Not in this game, that's for sure. Remarkably average.

Presentation 31%
Nice packaging, but the poor multi-load and slow pace give the whole thing a generally sloppy 'feel'.

Graphics 42%
Blocky and indistinct, with a fairly drab use of colour throughout.

Hookability 53%
You find yourself playing to see "what the next bit's like".

Lastability 41%
The lack of rapid firepower puts you off playing more than a few goes.