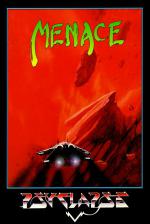 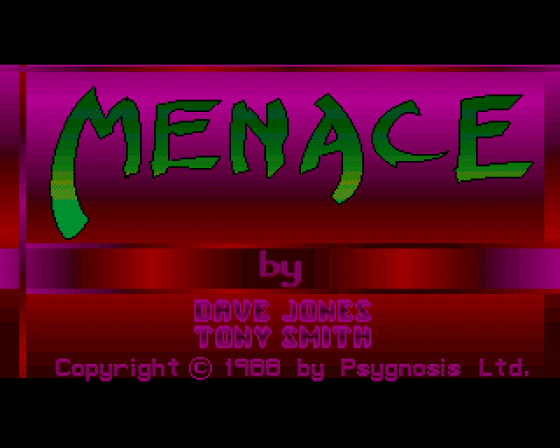 Destroy the planet Draconia? Me, li' ol' PG? How'm I supposed to do that? Oh, yeah... Yeah, I see... The only way it can be done is if some, ah, brave - did you say 'brave'? - right, brave person gets into a tiny, quite staggeringly small one man fighter and blasts seven shades of sunlight out of anything that moves. And I'm supposed to do this with a 30kW pea-shooter laser, am I? Yep, I see.

Look, how many times do you want to check I was listening at the briefing? OK, OK - I'll go through the history lecture one more time. Draconia's an artificial planet built by the combined forces of six exiled dictators who populated it with all the most belligerent and slimy creatures in the galaxy. The planet is now being used as a base of operations for piracy and... er... all sorts of other illegal stuff. How's that?

Yeah, right, now can we talk about bumping up my armament to some, ooh, I dunno, a quad-kill particle howitzer? How about some thermium cluster bombs? Firelance homing missiles? No? So how am I supposed to get out alive? Matter convertors - what are they? Oh, I get it. I just destroy a formation of aliens, then blast away at the debris and it turns into extra equipment. So what can I pick up? Oh, thanks - a list. Lemme see - rapid-fire cannons, lasers, outriders, extra thrust, temporary force field and shield recharge... 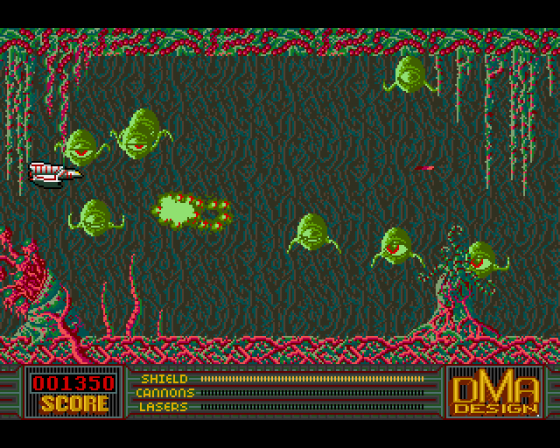 Well, OK, that doesn't sound too bad, I suppose. How do I get to Draconia, then? In a what? In the mouth of an Aldabran Space Slug?! Oh, just great!! *Just great*!! And I suppose you'll be beside me all the way as usual, watching the scenery scroll sideways across your little monitors...

Yeah, so Maff wanted this in the Challenge, and then he goes and finishes second! Huh! I wanted him to choose StarRay myself, 'cos I'm dead good at that - but this is all beside the point.

The main fault of Menace is that there just isn't enough of it - at £24.95 there should be more than just half a dozen levels, however beautifully they're designed (and believe me, some of the end-of-level aliens are *superb*). 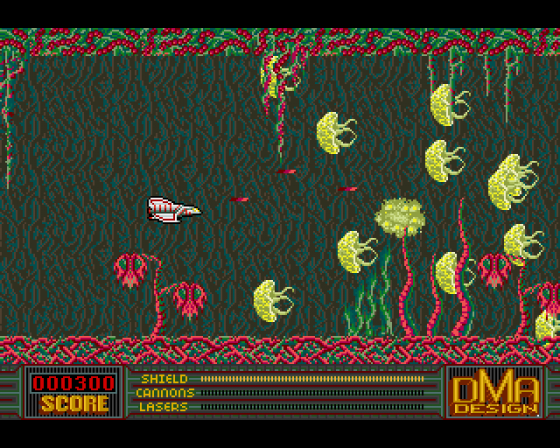 For a tenner or even fifteen quid, this would have been brilliant - as it is, try before you buy, because your money might not last that long.

The various screenshots of Menace that are currently knocking around fair made my trousers yearn for the lavatory, but when I first saw the actual game I was a bit bored by it.

Something about it must have stuck in my mind because I found myself coming back for another game time and again. It's a definite grower! 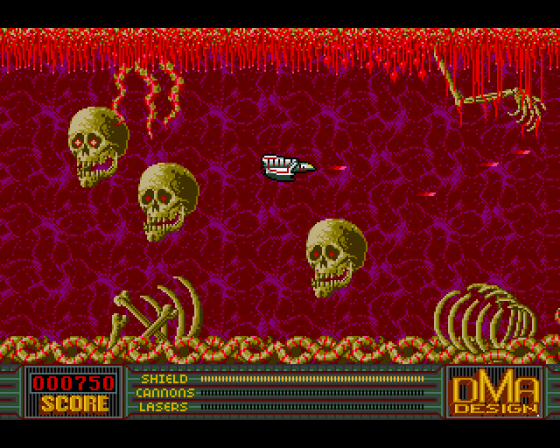 The programmers have sensibly put the better graphics towards the end of the game, giving you something to aim for.

Not to say that the graphics of the earlier levels aren't good, they're very good indeed, it's just that they get better towards the end!

The music and sound effects are of a very high standard and complement the action very well, especially the speech telling you what you've picked up. 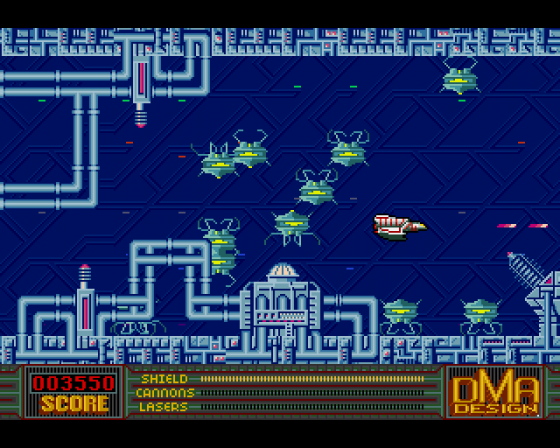 Menace will appeal to all shoot-'em-up fans and I daresay the odd casual blaster will enjoy it too. I've played it so much that I've decided to us it as my chosen game in the Inter-magazine challenge! High praise indeed...

Shoot-'em-ups don't come looking much better than this - right from the superb opening graphics and bass guitar chords, you know you're in for a bit of classy blasting.

Menace's graphics and sounds are indeed superb, but it has to be said that after sveral runs through the first few lvels, the laser-show gamepay doesn't quite live up to the polish. 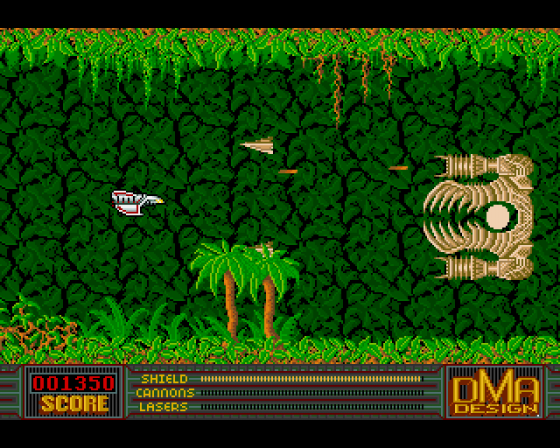 Almost, but not quite. The problem is that, even on Expert level, when you're not allowed to touch the scenery, the fleet of fire-button-finger can make mincemeat out of wave after wave of aliens with not a lot of practice.

From then on, it's easy to keep the ship stocked up with lasers, cannon shells and even shields. The fact that there are only six levels and the availability of a restart option mean that you'll soon see pretty much all of the game, and then you'll only be coming back to the game to beat previous high scores.

That's fine by me, but if you're after vast tracts of space to explore, you may be disappointed. 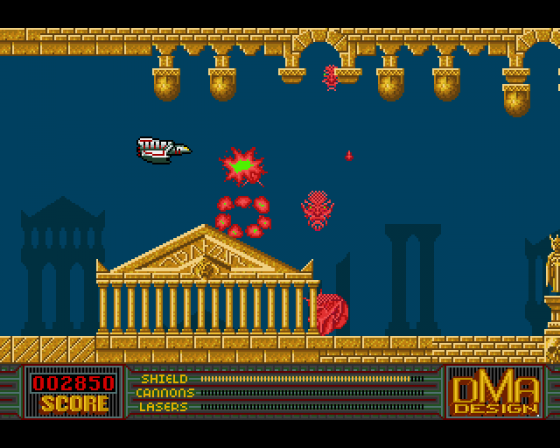 Hookability 90%
Brilliant graphics and addictive blasting grab you from the moment you pick up the joystick.

Lastability 69%
Only six stages, which aren't too difficult even on the expert level. The game continue option doesn't leave much to the imagination.

Nicely done, but a bit easy... There's a variety of gorgeous visuals and terrific end-of-level beasts. 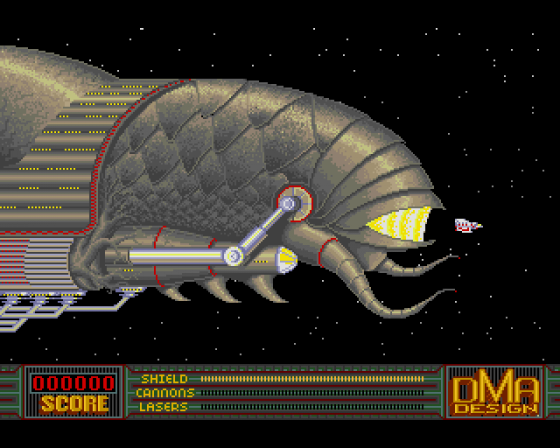 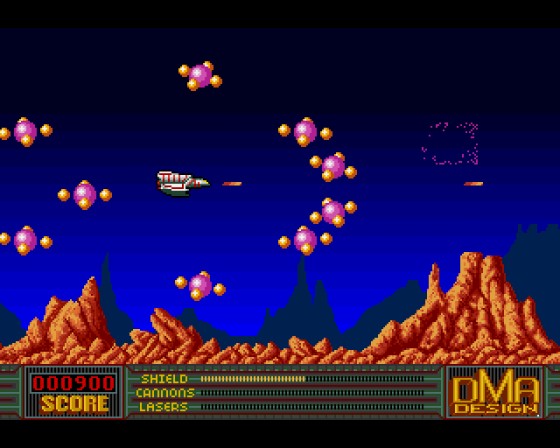