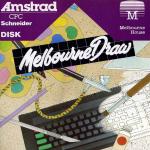 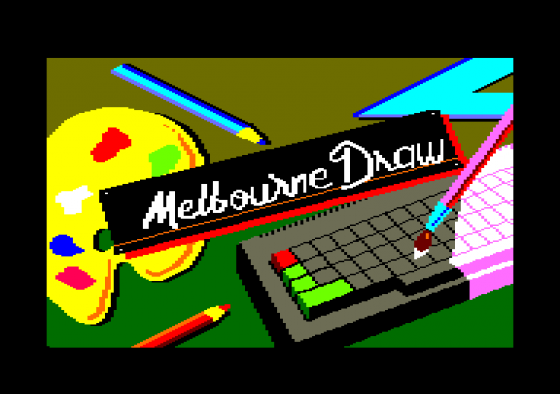 The program's loading screen is impressive, but then that doesn't tell you too much. You expect software houses to make an effort on art program loaders - to really stretch their package as far as it'll go. Oddly enough, Melbourne House haven't really done that here. Melbourne Draw is capable of some extraordinary things, but the only real indication of this at loading time is its length - it takes nearly a quarter of an hour.

Once loading's finished, you find the usual blank screen with cursor. You can move this cursor with keys or joystick - the normal movement speed is quite slow, but using Ctrl or Shift will increase this. It's a shame that this method of control is the only one available. The choice of an "intelligent" cursor-one which moves faster the longer you hold the cursor key down - would have been nice, and would certainly have made joystick control a more useful option. Pressing the fire button or space bar paints the pixel under the cursor in the currently selected colour.

Press the Return key, and a line of options appears across the top of the screen. Selecting between these produces one of a series of pull-down menus, allowing you to change mode, alter the colour set, draw an ellipse and much more besides. The pull-down philosophy is carried right the way through, with a pop-up palette for ink selection and small dialogue boxes to issue warnings. The latter appear whenever there's a risk of seriously damaging the current picture, and always give you the option of cancelling the relevant option.

The pull-downs offer most of the usual options - airbrush, rubber band, rubber box etc. - plus some unusual ones. You can set up a magnification window to give a clear view of individual pixels, for instance. Alternatively you could try the oddly named "Zap" function, which is used to change the colour of individual line segments. There are also a range of options to alter the front end - the way the program appears to the user.

However, there seem to be some serious omissions there's no paintbrush option, for instance, and no way to change the air-brush pattern. The fact is, you simply don't need them. Melbourne Draw has three pull-downs - "areas", "blocks" and "textures" which give you, between them, all the drawing power you can handle.

Areas need not be rectangular - you can define an area on the basis of its present colour, using the "Find Area" command. This works outwards from the pixel under the drawing cursor, noting all pixels of the same colour, until it reaches either the edge of the can flood it with a given colour very quickly indeed. What's more, the fill is extremely thorough - it can, and will, escape from a gap one pixel wide, anywhere in the boundary. This would cause problems, were it not for the way filling is split into two stages. The temporary colour flood allows you to spot overspills at the defining stage, before you carry out any permanent filling operation.

A block is simply a rectangular area of the screen. Creating a block is simplicity itself - you just select the function "Remember Block" from the Block pull-down, and then stretch a "rubber box" cursor around the chosen area. Having defined the block you can drag it to another position, copy it, mirror it or even turn it upside down. Thus, you can easily create symmetrical shapes, or re-arrange the composition of a picture if you want to.

Where most art programs have a fill command, Melbourne Draw has an entire pull-down for the purpose - the Areas menu. As with blocks, areas must be defined before they can be used. You can mark out any rectangular section of screen as an area - this is done, block-style, with a box-cursor. If you define your area thus, options include not only the expected colour fill but also colour merge and colour swap. These act almost like localised ink changes, forcing all pixels of one colour to another, or in the case of the colour swap forcing two sets of pixels to exchange colour.

The most astonishing feature of Melbourne Draw is texturing. A texture, in the program's terms, is a section of screen - but not of the drawing screen. Rather, it is a section of a separate texture screen which can be switched in or out of the display without affecting the main drawing. To define a texture, simply switch the texture screen on it overlays the lower half of the screen while it is in use - draw/spray whatever pattern or picture you want, and mark it with a box cursor. Now you can make copies of it on the main screen, just as you could with a block. More importantly, you can paint a trail of your chosen texture, just as if it were a brush. Textures can be multi-coloured, their backgrounds can be made transparent, and you can store up to 26 of them.

As if all this was not enough, you can combine these facilities to get even more striking effects. Texture fill is a very strong technique, allowing you to cover an area with patterned "wallpaper". Block copying can be used to transfer a pattern to the texture screen, and block mirror to create symmetrical textures. You can even build up large textures using smaller ones - it's entirely up to you.

You might reasonably wonder how all of this can be squeezed into a 464. It's not just the program itself - there's the texture screen, the pull-down storage, the area definitions and the magnification window all needing space allocated to them. The truth is, at full stretch Melbourne Draw can run out of memory. Pull-downs in particular can wipe out previously stored data - but never without warning you first. What's more, the warning is genuinely useful. Rather than using pull-downs, you can select every possible command by a short - typically two-character - keyboard sequence. After you've used the package with pull-downs for a while, you may well find keyboard entry quicker and easier. What comes as a pleasant surprise is that Melbourne Draw gives you the choice.

Melbourne Draw really is something special. It offers you enormous power and flexibility, for a very reasonable price - and it doesn't even need a lightpen, let alone a mouse. The performance it wrings out of 64K and a cassette drive is just phenomenal.

This is really something special. It offers you enormous power and flexibility for a very reasonable price - and it doesn't even need a lightpen, let alone a mouse. 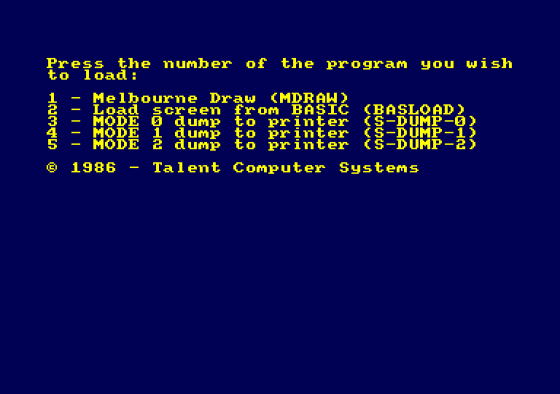