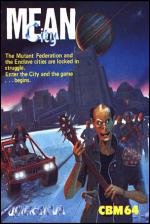 The unthinkable has finally occurred - planet Earth lies devastated by nuclear holocaust. The surviving threads of humanity have gathered themselves into two separate warring tribes: semi-nomadic mutants who scour the barren countryside and city dwellers who live in the shattered remains of Concurb G-Gow.

Following a raid, the city dwellers have captured Hante, leader of the mutants. In a daring rescue attempt, his son, Sante, decides to single-handedly penetrate the city to free his father. The task is not an easy one, as the digital key to the cell is split into four parts - with each section positioned on a pedestal deep within the city. To make matters worse, his cousin, Calte, has designs on the leadership of the mutant Tribe and sets off in pursuit - not to rescue Hante, but to kill him.

Either one or two players partake, with one player taking the role of Hante, and the other the cousin. In the one player mode, the computer takes control of Calte. The split-screen display depicts an overhead view of each character.

The city inhabitants are decidedly hostile towards mutants, and do their utmost to prevent the infiltrators from completing their prospective tasks. Contact with city folk depletes energy, and a loss of life is incurred when the energy status reaches zero. At this stage, any previously collected keys return to their respective pedestals. If a character is killed by his opponent, key sections carried are automatically transferred to the victor.

Only when a character is in possession of all four key parts can he then head for the cells to release Hante - for whatever purpose...

The scenario is certainly interesting, but when it comes to the gameplay, disappointment is in order. Mean City is just another Gauntlet variant, and not a particularly good one at that.

There are plenty of commendable ideas in Mean City, the most notable being the two player, split-screen display. It's a shame about the size of the screens though, the limited view leads to severe frustration at times.

The characters' movement isn't particularly smooth and the scrolling is slightly jerky, giving the whole game an unfinished feel about it.

Mapping is essential, but the small screen makes it a laborious and finicky task.

Graphics 67%
Good backdrops, although the small screen is hardly conducive to sight-seeing. Poor scrolliing and animation.

Sound 58%
Adequate, but sparse effects with music limited to the title screen.

Lastability 43%
A challenge is provided for those who are willing to persevere.