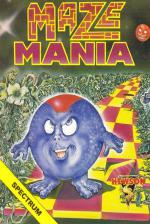 Hewson seems to have been a bit quiet on the full-price front recently (or maybe I'm just being unobservant), and since its stuff is practically always received with outstretched arms and slavering chops, Mazemania is virtually guaranteed a place in the history books. Another easy chart-topping Megagame, scooping up every award going and inspiring a stream of budget clones.

Flippo the hedgehog (not a good start) appears to be in some kind of Pacmania-like scrolling maze, being pursued by a plethora (hang on - my teef have come out Scrilch! That's better) of baddies. To escape he has to run about flipping over the tiles that make up the floor, which is much more aesthetically pleasing than eating dots I reckon, and gives rise to a variety of 'flip' jokes which we'll pass over for the moment.

Luckily there's absolutely no explanation to the logic underlying these activities, so we can dive straight in and examine the important bits.

The graphics and sound first, I think. Yup. Pretty good. Nice and colourful (those are shadows, not attribute problems. Honest). Fast scrolling. The best bit is probably the tiles-flipping-over effect. And the worst bit? The music on the title page, which sounds horribly like the 'hold' tune on the YS phone system.

As well as just the usual 'flip and forget' tiles, there are others that need a little more persistence. Some flip back if you run over them again, which can be rather annoying, and others need to be approached from specific directions or flipped twice. There are also icons drifting about which will give you the usual extra lives, energy and points if collected. Predictably, some also act as power pills and let you pounce on your foe for a change.

The trouble is, that's it really. For the first few goes the game is great fun, and that flip-effect sends a sort of tingley feeling running down your spine. Then gradually it dawns on you that mazes perhaps don't hold quite the thrill that they used to, the scenery starts to get very familiar, and so on. And from what I've seen there are few surprises in store on later levels, apart from faster, meaner baddies and more fiddly tile layouts.

All the same, though, Mazemanla is a good, honest, little game which I'd certainly come back to occasionally. It's just that, at one pee short of a tenner, I doubt it will stand much of a chance against the big licences, coin-ops and so on that are currently fighting for the number one slot on the prestigious YS chart. Hewson would have done better to have stuck to Plan A and released it on its budget Rack-It label.

Punchy little maze game, but which might lose appeal due to its repetitive levels.

A good, honest, little game which I'd certainly come back to occasionally.