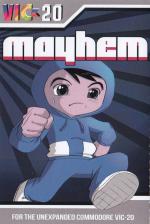 In Mayhem, you get a large blank arena, bordered on all sides by a blue wall. Inside the arena sits Wizzy, a bloke who looks remarkably like he just came off the worst from a fight with a car-crusher. Despite that, he's a nimble little fellow who can scoot around the arena at supersonic speeds and in one of eight directions.

Pinging off the walls of the arena are a number of balls, beginning with a single one. These always fly diagonally and at the same momentum. Your job is to avoid coming into contact with any of them for as long as you can. One coin at a time appears within the arena and each time you collect a coin, your score increases. The number of balls you must avoid steadily increases throughout the game.

Still in the dark? If you're familiar with Arkanoid, then imagine that game but without the bat and with you in control of one of its blocks and the object being to avoid the ball. You got it now.

As games for the unexpanded Vic go, it's actually pretty good and, with only 3.5K to play with, it probably loads faster than the average PS3 disc. Collision detection is good and it's a challenging play.