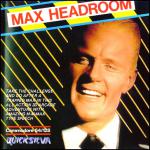 Yes it's a game about Max Headroom, the makeup coated, computer-enhanced TV presenter whose erratic voice stutters at every available opportunity. However, this arcade adventure is based around the 'film', not the television series.

Contrary to popular belief, Max isn't real but a figment of the future's imagination, a future where television is the only growth industry, globally dominated by Network 23.

The people at Network 23 are selfish rotters and when they learned that viewers were switching from their channel to watch Bigtime Television's Max Headroom Show, they were rather miffed to say the least. After having an emergency meeting, N23 executives decided to send two of their most reliable 'heavies' to kidnap Max for exclusive use on their channel. The abduction was successful and Max was taken to the N23 building. As you can imagine, Bigtime were a mite peeved at this and wanted to get Max back - immediately. So, they hired top TV reporter Edison Carter and his controller, Theora Jones, to perform the rescue job.

Naturally Edison can't just stump into the N23 building and casually stroll off with Max under his arm, oh no, there are a series of elaborate security systems that have to be negotiated before Max can be reached. Fortunately, the lush-lipped Theora has developed a Maxhunter program to help Edison break the codes.

Edison enters the building on the ground floor and has to ascend to the executive level, 200 floors above him. How is he going to get all the way up there? Not by the stairs, that's for sure - he's going to be well the cool reporter and whizz up in the lift. The only problem with this little plan is that firstly he must gain control of the lift. This is achieved by short circuiting a seven segment LED digital display. A time limit is imposed, during which a lit segment gradually decreases in brightness. If, at the end of the time limit, an E is left then you gain control of the lift system and zoom straight up to floor 200. But if you fail, the lift goes haywire and Edison gets, dumped on a floor randomly.

Your priority is to crack the floor's security system, because if you don't, Theora can't open any doors or operate the camera system. The code system consists of four lights that flash randomly four times, and Edison has to copy the sequence of lights backwards. Success enables him to enter the various offices and look for the four special codes to the Presidential suite, which is where Max is being held.

The building and floors are viewed in forced perspective, and any code screens are automatically displayed. The game is completely joystick controlled and uses icons to engage the various code screens, lifts, doors and the like. On entering a room the screen goes yellow and the message 'searching' appears. A few seconds later you are told whether or not there is a code to collect. When the four codes have been found it's time to go up to the Presidential Suite at the top of the building and rescue Max.

Edison's movements are constantly monitored by robot security guards that give chase and try to shoot the hapless fellow. Should one of their bullets hit home, a point is knocked off Edison's stamina, which starts at a confident 99% and slowly ticks down to a fatal ex-Edison zero. When stamina is low, Edison has to rest to regain energy. But time ticks by even faster, and if Max hasn't been rescued before six o'clock in the morning when the workers return, Edison is in trouble.

Oh, by the way, the terrible two who stole Max are now on the look-out for Edison. They prowl about the building and try to track him down. If our hero meets either of these then his quest swiftly comes to an end...

The Max Headroom television show is great, as is the film, which is more than can be said for the game. It's essentially a simple arcade adventure with several neat touches and very little to do other than trudge around 'samey' scenery attempting to collect four pieces of code. Ho hum. Admittedly, I haven't got too far into the game and have only managed to collect two pieces of code at most, but this is mainly due to my reluctance to play such a repetitive game. You could buy worse games for a tenner, but then again you could most certainty buy something a lot better.

This offering runs the terrible risk of basing an idea on a famous and well known cult - it has to be excellent to be any good at all; if it isn't, then disappointment is all the more fierce. Quicksilva hasn't failed on general implementation, for the game works smoothly enough and looks not unlike the film's computer simulation bits. But Max Headroom fails miserably in gameplay, providing no real thrills and not much intellectual stimulation from the code puzzles. I liked the building graphic as the lift sails up and down, and some sounds are good, but what happened to the game?

I wasn't really sure what to expect when Quicksilva announced that they were going to do an official Max Headroom game, but I'm sure they could nave produced something more exciting than this rather ordinary arcade adventure. The graphics are average with titchy, undernourished sprites trundling around a rather uninteresting and repetitive building. Sound is the only redeeming feature about the game, but who really wants to pay a tenner for some pretty music and great sound effects? I like the Max Headroom character a lot but I can't really see what this has to do with him. If you're interested then have a look, but don't expect much.

Presentation 68% The icons work well, but the instructions are sadly lacking.

Graphics 69%
Pleasant and effective, but nothing special.

Sound 86%
Racey tune adds freneticism to your search and the sound effects are good too.

Lastability 52%
The floors are all identical, and the problems are few and very similar.

Value For Money 64%
Max Headroom fans could be disappointed.

An ordinary arcade adventure. It offers nothing new and Max Headroom fans could be disappointed.