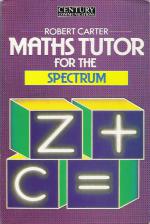 Maths Tutor for The Spectrum

Maths Tutor for the Spectrum by Robert Carter takes an unusual approach to the problem of tackling computer programming.

One of the main difficulties for people writing their own programs is the need to express relationships of shape and movement in algebraic terms. Robert Carter tackles the problem and has produced a highly readable book which starts from the beginning and works up to quite complicated mathematical concepts.

Each step is illustrated by a routine which can be entered on the Spectrum to show the concept working. Obviously those routines could be used later in programs, but by using them Carter has ensured that the reader will understand what the algebraic notation means. The subjects cover the most simple - such as rounding up - to the operation of differential equations. Carter's style is refreshingly colloquial and avoids the trap of being too dry to sustain the reader's attention.

Maths Tutor for the Spectrum would be useful for teachers in preparing classwork, students at examination level and self-motivated adults who wish to brush up their mathematics. It is an excellent introduction to the language of algebra and geometry and as such is to be highly commended.

Maths Tutor for The Spectrum

An excellent introduction to the language of algebra and geometry... Highly commended.
Logout