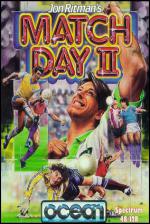 The original Matchday was first released on the Spectrum, and was critically acclaimed as one of the best sports simulations of its time. The Commodore version, however, was very poor and only ever appeared on the They Sold A Million II compilation. Now authors Jon Ritman and Bernie Drummond have collaborated again to design the successor, Match Day II, with John Darnell providing the C64 version.

One or two players participate in anything from a one-off match, to a full-blown league or cup competition. Before kick-off, the player is given a series of menus allowing him to change virtually any aspect of the game to suit his needs. This starts with the option to compete against either a human or computer opponent, or even have two human players against the computer. The colour of the teams' strips and the pitch can also be changed, and handicapping introduced by giving one team the advantage of starting the match with a previously specified number of goals (or perhaps to simulate a two-leg game?).

Other factors that may be altered include attacking or defensive tactics for either team, the time played for each half, human or computer-controlled goalkeepers, and the volume of sound effects.

During a game, the player controls one man at a time, depending on which footballer is closest to the ball in play. Moving the ball around is achieved using a 'kickometer' - a constantly pulsing bar displayed both at the top of the screen and above the currently controlled player's head. The strength of the kick is determined by the size of the bar when the fire button is pressed, even to the point of allowing the player to perform backheels when the meter display a negative amount. The ball's direction is determined by the position of the joystick.

If a player has possession of the ball, he may either chip it, if he kicks while running, or pass along the ground if kicking when stationary. A player who doesn't have the ball may 'lock' his personal kickometer by keeping the button down. This means that when he next touches the ball, he will instantly volley it with the strength displayed above his head. He may also head the ball with any strength he wishes by pressing the button when the player is below the airborne ball.

One player may affect the course of another by barging into him, forcing him to miss-kick. Fouls are not catered for, so over-zealous challenges remain unpenalised.

The program supports throw-ins, corners and goal kicks (which provide a greatly increased kick strength for realistic range), and a realistic deflection system whereby the ball rebonds correctly from a player's body, dependent upon the direction and speed of both ball and footballer.

Admittedly it's less spectacular than Gary Lineker, but far more satisfying to play, as goals really do have to be built up. The twin player option is a superb idea too, taken from the likes of Kick-and-Run, and makes matches far more entertaining ("Over 'ere, son, on me 'ead"), as well as giving some variation from the old one-against-one style. The niggles about the game diminish as you play it, but are nevertheless annoying - the slowness of the players' movement, and the glitches which occasionally cause the ball to disappear.

Some of the computer 'intelligence' also suffers from International Soccer-isms, with control sometimes not being handed over quickly enough.

For five long years, International Soccer has been regarded as the best football game available on the Commodore. Now things have changed - Match Day II has arrived.

Its sheer depth is unbelievable. There are seventeen screens of options, allowing nearly all of the game's parameters to be changed. Options include one or two player games and twin player mode - where both players play on the same team.

There are league and cup competitions, with the league perfectly structured to challenge the player to the full. One of the real beauties is the way that the players are selected to receive the ball - the computer always seems to select the right player. The control method is incredible, and allows a wide variety of kicks, passes, vollies, chips and backheels with the minimum of hassle, and all dead ball situations are fully controllable.

The gameplay is very challenging - the lowest level is tricky, and beating the high level should take an awful lot of practice. The best thing of all is that Match Day II plays just like a game of football - which is surely the highest commendation one can give.

Another footy game? "Can it possibly be better than good old International Soccer" is the question on everyone's lips. Personally I think they're on a par. Match Day II's playability is hampered by the lack of speed during play, but the amazing series of options more than make up for this deficiency.

The kickometer is a great idea and allows a skilled player to put together some really intricate moves. However, when all is said and done, I can only see this appealling to ardent football fans - it's just too much like football, and not enough like an arcade game - it's up to you to decide whether that's a good or bad thing.

Presentation 96%
An absolutely amazing array of options and superb use of joystick - the occasional glitches are annoying though.

Hookability 81%
As it is football, the rules are pretty obvious, but some of the controls, especially the kickometer, are tricky to master.

Lastability 92%
Three increasingly tough skill levels and the incredible options should keep a football fan happy in the months to come.

Overall 90%
Probably the most accurate football simulation to date, and despite some flaws, is a thoroughly enjoyable kickabout.

Probably the most accurate football simulation to date and, despite some flaws, a thoroughly enjoyable kickabout.