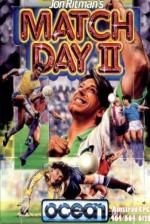 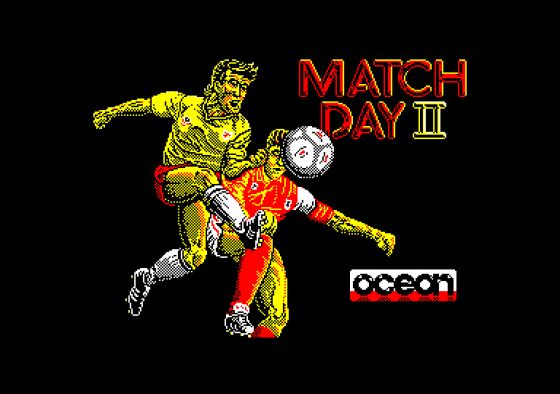 Jon Ritman and Bertie Drummond are the programming team that brought you Batman and Head Over Heels. Recently, their attention has been concentrated on football and this is the result. All the features of Matchday have been retained and lots of new options have been added.

The "front end" of the game is enormously impressive, giving a tremendous range of useful options. From a menu you can choose to play against the computer, play another person, two people playing the computer, a cup competition or a league. In the first two options, you play one off games which you can handicap at the start of each half so that one team has an advantage. This is useful because it makes it possible for novices and experts alike to have a challenging contest. 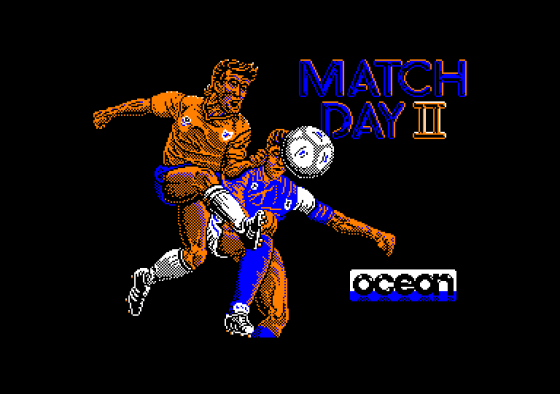 Fourteen matches are played in the league competition and points are awarded with three points for a win, one for a draw and none for a defeat. The cup is played through three rounds: quarter finals, semi-finals and final, the winner of each match going through to the next round. In the cup, extra time and replays crop up if the score is even at the end of the match.

The final option on the main menu lets you change most of the features of the game. Keyboard and joystick control can be defined by the player, team names, tactics and the colour scheme can also be changed. The tactics options allows you to specify whether each of the two teams plays an offensive or defensive game.

Further options allow you to alter the volume of the sound, time for each half (5, 10 or 15 minutes), kickometer, skill level of the computer and whether or not the goal keepers are computer- or human-controlled. The computer has three skill levels and it plays a mean game, even at low level. 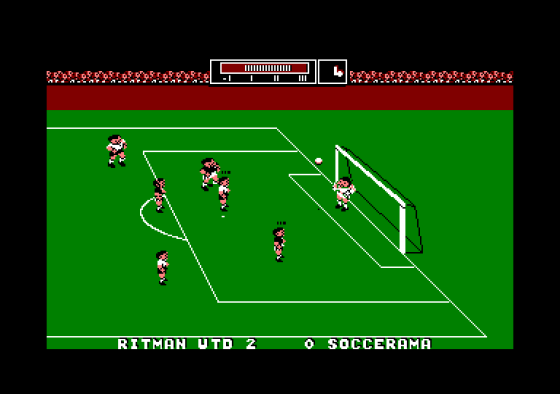 The kickometer is used to determine the power with which the ball is struck and for the first few games you will be better off setting the kickometer to hard kicks. The "all kicks" option has the added feature that you can do back heels, but practice is needed before you will be able to master this. One last option lets the computer matches be attended or unattended which means that either you can watch the two computer teams battle it out or just see the results.

During play, you control the player that is nearest to the ball, or who it is headed towards. Control changes when the ball goes out of range of the player. The ball can either be kicked or headed and the power of the shot is governed by the status of the kickometer. You can tackle your opponent or even give him a friendly nudge to try to cause a mistake.

In Matchday, the graphics were not exactly brilliant, but they have been completely redone this time and they look much better. Some confusion does occur at times when a lot of figures are clustered around the ball, but this is only to be expected in this sort of game. Sound is limited to the kicking of the ball and roar of the crowd.

This is, by far, the best arcade style football game I've seen. There are so many options to choose from that you can tell that a lot of care has gone into the programming. The handicapping feature means that you will always find it a challenge to play.

As far as I'm concerned, Jon Ritman and his sidekick Bernie Drummond are the best game programmers you can find. Every little detail seems to be taken from the point of view of "what would the player like to be able to do here" rather than "what's easily and quickly programmed". The essential gameplay hasn't really changed but you can do just about anything you want to to change things around. A lot of programmers and software houses could learn a lot from the thoroughness of this team. I hope they do.

Graphics 83%
P. Clear graphics and a good use of colour.
N. Does get confusing at times.

Grab Factor 85%
P. All the playability and addictiveness of the original.
P. Great concept of two players on one team against the computer.

Staying Power 88%
P. Comprehensive and astounding list of options.
P. Winning cup and league will you a long time. 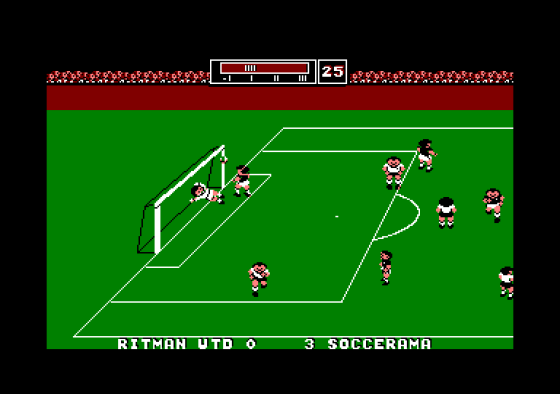