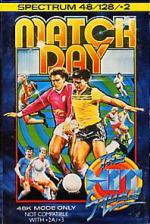 Why, I ask myself, was Match Day heralded as such an astonishingly brilliant game? It's rubbish! Even if you're absolutely wrapped up in football fever at the moment, you'd have to be beyond loopy and into the dangerously insane category before you could utter anything favourable about this "outing".

Before you can even get into the game, you have to negotiate some absolutely horrific control selection menus, guaranteed to stretch your patience to its absolute limit.

Once you've endured this trial, the shortfalls; the glaringly sub standard graphics, the atrocious sound and the ploddy gameplay stand slim chance of receiving a benign reception.

Kick off! The players limp around the field like so many wet fish. Good fortune occasionally smiles and they find themselves in possession of the ball, lolloping up the field toward the enemy goal.

More often than not, you find yourself "tackled" simply by running too close to a player from the other team. Since the screen is laid out in artificial perspective, it's extremely tricky - even with shadow - to intercept the ball from throw ins or long kicks. I always ended up running alongside the ball. Needless to say, the computer controlled players don't make such mistakes.

While all the basic elements are included, throw ins, goal kicks etc, the game simply doesn't hang together. It's more frustrating than fun.