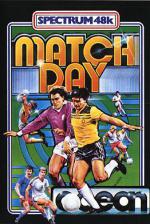 You may remember World Cup by Arctic Computing, one of the first good football games on the market. Match Day is far superior to any other and is of the same quality as International Soccer for the Commodore 64. Obviously the graphics are not as good, but they are very clear and the problem of bleeding did not seem to occur. The ability to alter the colour of the teams is a good idea, so you can pick the one that is most pleasing to the eye and easiest to recognise.

The extensive menus at the beginning are very useful, where a number of details about the game can be changed. There is not enough space to list them all here and you more than likely would get bored, but to give you an idea it is possible to alter the names of the teams, play against the computer, a friend or in a league, alter the length of each game, choose how each player is to control his team, difficulty levels of play, and so on.

The game starts as the teams run out on the pitch, with the tune "Match of the Day" sounding (and no Jimmy Hill). It is a bit tedious waiting for positions to be taken, but it is at least realistic.

The whistle sounds and the game begins. Playing against the computer can be quite difficult, especially if playing on one of the harder levels (there are three levels in all - amateur, professional and international). As in most of these games, you are in control of the player nearest the ball. At times it can be difficult to gain control of the ball, especially as there is no facility to strike the opposing player, but once in control, you can pass to fellow members, dodge the other team and hopefully score. Then a kick or throw-in is taken, the direction is controlled depending on the movement of the joystick or keys, so passing to your own team should be easier than on a real football ground.

The game is ideally played with a joystick, but if you are challenging a friend it is unlikely that you will possess two joysticks, so the keyboard will just about suffice.

As with most of these games on the Spectrum, due to the limitation of sound, headaches can be obtained quite easily, but the on/off sound switch is a Godsend. The reality of the whole match, with a reflection as the ball bounces and the quality graphics make this a worthwhile buy, allowing you to play football from the comfort of your armchair.

The reality of the whole match, with a reflection as the ball bounces and the quality graphics make this a worthwhile buy.