﻿ Masters Of The Universe (US Gold) Review | Crash - Everygamegoing 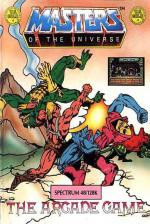 First they went from TV stars to plastic toys, and now - predictably perhaps, they're a computer game. Masters Of The Universe has gone from strength to strength since arriving in this country from the States. US GOLD has licensed the idea from MATTEL and converted the hunky cartoon characters for the pixilated small screen.

All the favourites from the series are here, including the evil Skeletor, Sorceress, He-Man and of course Castle Grayskull. You, hunk that you are, play He-Man as he punches, slashes and kicks his way through yet another attempt to overthrow Skeletor.

Way beneath Snake Mountain the evil Skeletor has discovered the arcane Hearth stone, and by using its supreme powers he has managed to take over Castle Grayskull. He-Man has vowed to destroy the Dearth stone and put a stop to Skeletor's dastardly plans for domination. Unfortunately, Orko, trying to help out, cast an Imprison Spell at Skeletor, but because he was heavily protected by the hearth stone, the spell rebounded and now Orko is himself imprisoned inside Castle Grayskull. Now read on...

The task is to break into the castle, release Orko, destroy the hearth stone and reinstate the Sorceress back where she belongs inside Grayskull. There 's a drawback. Skeletor has created an army of clones within the castle, who have been programmed to attack intruders, sapping their energy, and they must be destroyed or avoided.

Luckily, hunky He-Man, armed with his trusty Sword of Power, can despatch most of the clones with a quick poke at their nether regions. He's also a very agile fellow, able to wn and leap over obstacles if necessary.

Apart from slaying as many clones as possible, the idea is to collect objects on the way, which might be useful during the mission. They also provide Orko with the right spell to release himself from the castle and to conjure the spell that you require: a spell to turn the sword into an Atom Crusher.

How much power remains in He-Man's sword, how many skulls he's cracked, and how much Body Shield he has left, are all shown in a status panel. Body Shield protects He-Man from most of the blows inflicted on his muscular body, and appears as a block around the on-screen character. It wears out though, and leaves him vulnerable to sudden death.

There's a time limit too, represented by moons. At the start He-Man has only three moons to finish off Skeletor. Will he manage everything in time?

'The gameplay is non-existent, the graphics are bad, there's no sound and it's badly programmed. In fact the only thing that Masters of the Universe has going for it is its name. The controls are badly laid out, and there are two jump keys - one for each direction! Nice, pretty backgrounds and lots of colour, but when you move around things start to get sick (although there's no colour clash - the programmers have got round this by putting He-Man in a box, so whenever he goes near a landscape feature it gets rubbed out. Keep away, this is completely horrid.'

'What has us GOLD done this time? This must be one of the worst games to come out of their stable for ages - and it's one of the worst looking games around. There may be a lot of colour on screen, but it's badly constructed and too liberal - and why the hell they've got a big black 'halo' wound the main character is beyond me. I found it unplayable, with the collision detection particularly spelling. I found it no fun to play, and there's nothing even slightly addictive to hang on to. I hate to say it, but even the TV series is better than this.'

'What a pile of rubbish! The 'filmation' business is confusing, as filmation in computer terminology means something quite different to the definition used by the film production company who make Masters of the Universe on TV. The graphics aren't very good, and He- Man himself doesn't look particularly realistic. It's very boring to play, and not much good to look at. I wouldn't recommend it.'

It's very boring to play, and not much good to look at. I wouldn't recommend it.