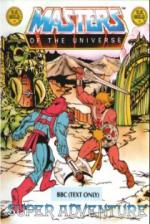 Earthquakes threaten Eternia, and King Randor summons Prince Adam to seek out He-man, for only he can save the land. As the Prince, you know better than to set off in search of He-man. Instead you must find the Sword Of Power that actually transforms you into He-man. Without it, you will get nowhere.

A tour of the locality reveals the extent of the damage caused by the quakes. A stable block has collapsed, and the Palace Gardens are in a state of ruin. Down at the inn, many of the locals have gone for shelter and, presumably, inner-strength! There, if observant, you might meet an old friend in the crowd.

Knowing the secret, you will soon make your way over the Jawbridge and into Grayskull Castle, where your old friend, The Sorceress, confirms that indeed it is none other than the dastardly Skeletor who is behind the quakes. She offers you help in defeating him, but first asks you to restore the Timelinks. Do this, and a potent weapon will be yours.

Before long, you will be traversing tunnels and caves, and emerging into the Shadowlands. Along the way you will meet up with many characters. It pays to stop and talk to them! But you won't find Cringer. The necessary program logic would have been not only mindbending, but too large, says Mike Woodroffe, one of the co-authors. "Adventurers try out anything," he explained. "Imagine what would happen if, for example, Cringer was Battlecat, with He-man Riding him, and He-man decided to drop his sword!"

There are also some real nasties to test you - Beastman, Mantanna, Merman and Skeletor - and there's no shortage of monsters either. If the scorpions don't get you, chances are Rockbinder or the Shadow Weaver will.

A lot of thought, plus some trial and error, is required to determine how to either pass or defeat them. There's a fair number of sudden death situations, in doing this, which normally would be quite unacceptable. However, the way it is handled in this game, makes the adventure very playable, and, perhaps, even more realistic. After all, in real life, it is quite likely that you would walk into a trap with no warning, yet would be able to save yourself had you had the knowledge of how to overcome it.

When you walk into a dangerous situation, there are usually a few moves before you die. Thus if you make regular use of the QSAVE option, you get the chance for a little experimentation, to try to discover the way out, before it is too late. And then you can return quickly to the point at which you saved, by QLOADing an old position.

This is the adventure game - do not confuse it with the Masters Of The Universe arcade game. There are over 80 locations and, except on the BBC and C16 versions, each has an attractive and instantly displayed picture. The BBC and Spectrum 128 versions have augmented text.

Masters Of The Universe is not easy. The hand of Stefan Ufnowski has once again been at work here, in conjunction with Mike Woodroffe, Teoman Urmak and Graham Lilley. So you won't be surprised to find strange devices like a Minus Manale, a Moleculator and a Wycord lying around.

The EXAMINE command is required extensively, and is often rewarding in disclosing hidden objects, and vital clues. Unfortunately, although many clues describing objects put you on the track of the correct solution, implementing it is another matter.

If you went along to the local hardware shop, and asked for a Minus Manacle, for example, you would expect more than just a rundown of its purpose - you would help for a set of operating instructions. The Manacle, to do its work, must be attached to something, although you are not told so. That would be fair enough if the required command was simple, with plenty of alternative words. However, you must FIT MANACLE TO xxxxxx. FIT MANACLE on its own, in the right location, will not do. PLACE, ATTACH, PUT and FIX are not allowed.

Othen than this, here is another excellent adventure from the Adventure Soft team.

Another excellent adventure from the Adventure Soft.