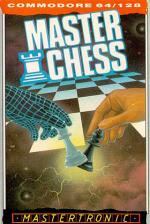 Mastertronic's addition to the ever-increasing range of computer chess games comes in the form of Master Chess, a multi-function budget program.

The board is of the standard two-dimensional variety, with the ranks numbered one to eight, and the files represented by letters a to h. This alpha-numeric system of co-ordinates is standard for both black and white (Black's King occupies e8, his Queen d8, and so on). Moves are executed by entering the co-ordinates of the piece which you intend to move, followed by the co-ordinates of its intended destination. For example, at the beginning of a game d2 - d4 moves the White Queen's pawn forward two squares.

The program contains eight main functions, activated by pressing the relevant numeric key. RETURN simply exits the menu and returns to the current game screen. The 'skill' level of the computer opponent is altered via the Set Level option - the amount of time (in seconds) that the computer is allowed to take in which to consider its moves is adjustable. The Re-Arrange feature allows the placing of any piece on any square - without restriction - and works from a current game position. Set-Up is similar to the previous function, this time working from a blank board. Replay goes back to the beginning of the game and plays it through move by move. The current game position can be saved onto tape for later reloading via the Load Game option. Selecting New Game discards the current set-up and returns to the start of game position.

Other features include the facility to change the colour of the board at the beginning of each new game, and the option of playing either black or white. The program is also capable of carrying out unusual moves such as en passant and castling. A nice feature is the graphic display of pieces taken, which appears at the side of the board and can be viewed by pressing the space bar while Master Chess deliberates.

Having listed the operations which this program can accomplish, the obvious question is: how do they actually work in practice? Unfortunately, the answer is "not very well". The Set Level option doesn't appear to have any real effect, unless the computer is allowed about ten minutes per move - even then it often makes seemingly rash moves. There are also some basic and unforgivable flaws, which completely refute the manufacturer's claim that the program has been put together with beginners and improvers in mind. For instance, the computer occasionally makes stupid decisions which would be surprising even from the most inexperienced novice - this was especially noticeable at the lower levels, and includes such errors as the sacrifice of the Queen in order to gain a Pawn! On another occasion, the computer conceded Checkmate when it had at least two obvious avenues of escape - very strange indeed.

An annoying aspect of the skill level option is that the program always takes exactly as long as it is allowed - even for the simplest and most obvious of moves. This may be useful for setting your watch by, but it is particularly annoying, when the computer takes ten minutes or more to consider its opening move!

In conclusion, I wonder what value this (or indeed any) budget chess program actually offers. The only useful function it could fulfil is as a training program for young beginners who could not afford a more advanced and expensive package. However, the many faults which Master Chess incorporates tend to negate its suitability even for this purpose. Not recommended - even at the price.

This piece of software is an example of all that can go wrong with a chess program. Not only does it play a dull, unimaginative, slow and downright incompetent game of chess, it also flagrantly violates some of the rules of the game.

Even for the price it should be avoided. This sort of thing could really quench the enthusiasm of a novice trying to get into the game, and offers nothing for the expert.

Plays a dull, unimaginative, slow and downright incompetent game of chess... It also flagrantly violates some of the rules of the game.