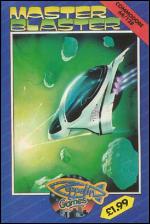 This game gets no marks for originality, as it's extremely similar to a certain game featuring rotating ships and asteroids that I could mention. No, I didn't say that, not me, never in the world. Okay, I did.

The plot places you in the role of a defender who must clear the solar system of bothersome asteroids - the gameplay, however, consists of whirling about the screen blasting rocks to bits. If you're really good then you get to dock with the mothership. Er... and that's about it really.

The graphics in Master Blaster are rather weak, but the major failing is the contrived and repetitive gameplay. Zeppelin for once seem to have leapt on the "current license tread" bandwagon, and it just hasn't worked. A poor release for a company with such high standards.

A poor release for a company with such high standards.