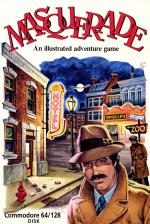 This is another of those disk-based American adventures that looks great but falls down badly when it comes to programming. You start off in a hotel room, gazing down on a dead body which belonged to a hired assassin by the name of Ivan Tupickemoff. Beneath his body you will, in your role as a sharp-eyed detective, also notice, the infamous Commodore split screen glitch, which flickers annoyingly as you try to read the skimpy text below.

The format of this game is very similar to Mindshadow, but whereas Mindshadow had some powerful and unusual commands, Masquerade relies on two-word inputs and a small vocabulary. What's more, it doesn't give you much help if you run into linguistic problems - enter 'Zxxrtw', for example, and it says happily 'I can't do that right now!' I'm not surprised.

As you explore your hotel, you discover a time-bomb in a phone booth, set to go off at 6.l5pm. Since your watch says 5.20 or thereabouts, that gives you just about enough time to rush out into the street, get stabbed a few times, visit the zoo, and indulge in various verb-noun encounters with attendants and sinister figures. There's no doubt that the graphics are very good, but if you've got a disk-drive you've probably played a game like the disk Hobbit, or perhaps even an Infocom game, and you'll be expecting more for your money than the simple set-up you get here.

Perhaps I shouldn't be too hard on Masquerade - it does look good, after all. And there is a certain atmosphere about it, mainly induced by the thought of being blown up at 6.15, but a masterpiece of programming it ain't.

This looks good, and there's a certain atmosphere about it, but a masterpiece of programming it ain't.