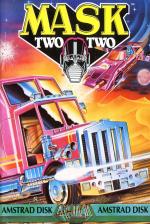 Software companies have become obsessed with producing games that are either arcade conversions or based on comics.

After the first attempt at producing a game based on the exploits of the five Mask agents, codenames Hunter, Magic, Megabyte, Chopper and Powerkeg, Germlin has come up with another.

But Mask II is not as enjoyable as the first one, and gives little reason to keep you stuck to your seat (or joystick) for a long time. But enough of the hypercritical comments, let's get on to the game play!

You begin at Mask HQ where all Venom activities are constantly under surveillance. As soon as a Venom's poisonous plot has been unmasked, you must take three of the five Mask agents to disrupt and spoil Venom's plot, if you can. Before actual confrontation with Venom's forces, you select your three appointed agents from within Boulder Hill in the Energised Room, with the aid of the Mask computer.

Once selection is complete, the team heads out on their mission to confront Venom.

The missions are as follows:

1. To save the President of the Peaceful Nations Alliance. The President has been kidnapped by Venom while on peace summit talks between the world's nations. He was in the process of signing a peace treaty, which would have ensured peace for decades. The mission is to rescue the President from the evil clutches of Venom.

2. To destroy a new Venom base. Recent reports have been received about a new Venom base which is being used to co-ordinate their Middle Eastern activities. They are tapping into all of the strong producing oil fields, and are taking control of the important oil resources needed by the rest of the world. The mission is to render the base inactive by attacking it.

3. Destroy weapon and take a ruby back to its temple. Venom has been very, very naughty, and stolen the fabulous ruby from the sacred Crown of Fire, which lies at the base of a dormant volcano deep in the jungle. They intend to use the ruby within a high-powered laser and cause large amounts of damage to several populated areas. What you have to do is destroy the weapon (that is, of course, after you've removed the ruby!) and return it to its rightful owners.

The program uses a multi-load function, and all three missions are loaded in this way. Each Mask agent is selected from the keyboard. This makes control of the current vehicle extremely difficult - you have to reach across the keyboard while trying to defend yourself from oncoming traffic, often finishing with your vehicle being either blasted out of the sky, or sunk in a lake.

The graphics are of average quality, but the use of colour is what really brings out the better points of the game. Sound is minimal and playability is sluggish.

The graphics are of average quality, but the use of colour is what really brings out the better points of the game. Sound is minimal and playability is sluggish.