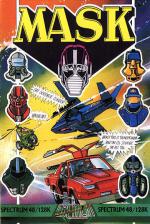 If you wanna get ahead getta MASK!

Yup, the boys from the books, comics and thoroughly bendy toys have appeared on the screen in their own computer game (at last).

Just the other day, MASK arrived from Gremlin, still faintly glowing, and promised to be mighty tricky, Guv.

THe scam goes something like this. Hero Matt Trakker (looking remarkably like a member of the Douglas family, Kirk or Mike - I defy you to tell the difference) is jetting about in space in his car Thunderhawk looking for his mates and trying to find and blowaway the VENOM base.

It's all done in plan-view in four scrolling landscapes. The first one's called Boulder Hill and it's very yellow.

At first you've no idea what's going on. Stand still for a second and you'll get blasted before you can say shaboinggg! by loads of tanks which rumble into the screen.

To avoid having your bits blown off first time out, you have to work out what's going on - which means reading the lengthy instructions. And so detailed are they that I very nearly decided to play Eastenders instead. Well it would have been easier...

Collecting things has to be done in order or you won't get anywhere. Firstly, find and pick up a scanner, by driving over it. Then, collect six pieces of a scanner security key in the same method. Then switch to the Assembly Screen, and put the pieces of key together to form a letter. Then, and only then I might add, can you activate a scanner, and locate the first of your missing agents.

Well. (Are you still with me on this? Not far to go now). Having racked my brains to shreds to get the key together. I promptly got blown up. That's not the idea! The idea is to get the agent, find his mask (only he can open the box that his mask is tucked in) and then when you've got both agents and both masks get the hell out of there.

Get all the agents, all the masks, bomb the VENOM base, and you're home and dry.

I must admit that I didn't like MASK at first. The graphics are strictly monochrome, and Gremlin is gleefully employing the same 'momentum' movement that was used in The Final Matrix which means you move about like you're on ice.

Things whizz about pretty quickly, and while you're still trying to get yourself together, something bombs the hell out of you, and it's back to square one.

So I was getting pretty impatient. Then suddenly I'd found my first agent and I was hooked...

One of the good things about MASK is that it's big, but not too big too handle. THere are four main locations, Boulder Hill, Pre-Historic, Far-Future and the VENOM base itself. Each contains a variety of different things to dodge and destroy, including freight trains, pterodactyls, erupting snakes and exceedingly unpleasant giant spiders. What with the scanners, keys, repair kits and agents to pick up and collect, life is never dull when driving Matt Trakker's Thunderhawk.

There's something for everyone in MASK. It's one of those games that employs elements of shooties, thinkies, arcadies - you name it, it's there. And far from being overly complicated, it's all really accessible and highly addictive.

By far the hardest part is assembling the security key, which is what really lifts MASK out of the ordinary.

The only blackish mark on MASK character is I'm sure some people will quickly get bored with being unable to assemble that key, and may decide MASK is just too complex to bother with.

Hopefully though, there aren't too many who'll think like that because, if MASK is one thing, it's definitely well worth persevering with.

Jam-packed with puzzles to solve and enemies to destroy. Needs patience, perseverance, and more than a little luck!

Jam-packed with puzzles to solve and enemies to destroy. Needs patience, perseverance, and more than a little luck!