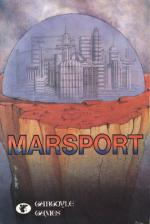 Right, power up your hyperdrive, shoot forward into the 25th Century and set your docking computers for entry to Marsport.

It's 2494 and the Earth has now been besieged for decades by the forces of the Sept - alien beings, they are spacefaring, warlike and merciless. The Earth has been kept safe by means of a power sphere around the orbit of the moon but the Sept have found the original plans for the sphere at Marsport.

Guerrilla fighter John Marsh has been despatched to Mars to locate and retrieve the plans and you must assist him through the ten levels of the dome. Escape is only possible with the plans and there are many ways to die.

The game is controlled and designed in the same movie style of Tir Na Nog and Dun Darach. The space-suited figure of Commander Marsh strides along corridors in much the same way as Cuchullain. Action is smooth and unflickering in a convincing 3D way.

The Warriors are hopping beetle-like creatures who move fast and never ask questions. The Warlords, more noble and less frantic, sit in corridor spaces like arachnid cabbages - only their probosci are scorpion-like and kill on contact.

When you enter the base from the Spacefield your first purpose should be to get some sort of weapon. You are placed on the 'C' level of the base, and must descend to the Daly level where the supplies are kept.

Having explored a bit you'll probably find the Downtube. It's only then that you realise that the lift tubes don't connect one floor to the next as you'd expect... they miss one out. Now you're on Elis level, a residential section where the Sept have their quarters. Watch out.

There are chutes for refuse, lockers where goods can be stored, points for charging weapons and supply units which will provide you with things like guns, gun permits, charcoal, flour and a wide range of consumer goods.

Try to locate Factor Units - those will assemble two or more objects to make a new one. There are also Key stations situated near doors or wall units. They will open the door if you can insert an appropriate object into them.

Gargoyle has yet again produced an enormously sophisticated program. The introduction of an arcade element with the power-gun adds extra zing (or zap) to the proceedings. Top marks to a firm who deliver consistently fine software.

An enormously sophisticated program. The introduction of an arcade element with the power-gun adds extra zing (or zap) to the proceedings.