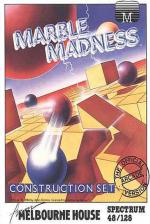 Everyone is aware of Marble Madness by Ariolasoft on the Commodore 64. However, the Spectrum and Amstrad rights are owned by Melbourne House. Mike Roberts takes a look.

It all started with a smash hit arcade game that took the Coin-Op World by storm. With a completely new concept, great graphics, and fantastic music it was what the computer world was waiting for. After Gyroscope (also by Melbourne House, but withdrawn after pressure from Atari) and Spindizzy, the official game made its appearance on the Commodore 64 and the Amiga. However, whilst such a complex game can be implemented on these machines with their fairly advanced graphics, putting it onto machines that have fairly crude graphics like the Spectrum, and to a certain extent the Amstrad with very slow processors, poses much more of a problem. However, Atari were so impressed by the Melbourne House of Marble Madness - Gyroscope - that they got the licence.

However, implementation problems mean that a pure conversion is out of the question. So if you are going to have to change the game a bit, why not change it a lot? So the Melbourne House variant, whilst retaining all of the spirit and playability of the original game, also has a lot of extras - with very few omissions. But what of the original game?

As I have said, Marble Madness was almost unique in the coin-op games world as it was basically a completely new idea and concept. In a world of shoot-'em-ups and thousands of identical karate games that get more boring by the minute, a problem solving/skill/competitive/description-defying game like this was like a breath of fresh air. I remember that when I first saw it a couple of years ago when Gamer first burst on the newsagents' shelves and I started writing 'Coin-Op Connection'. I played the game in a trade showroom for eight hours solid and couldn't write up the article because my wrist was put out for a week.

The game is based on rolling a marble down an isometric 3D-ish landscape that has holes, slippery areas, barriers, lifts, drains, conveyor belts, vacuum cleaners, slime monsters, enemy marbles, bonus areas, acid, and of course the goal - which is the object of all your efforts. In the Melbourne House variant of the game, only about half of these hindrances are present - but believe me that's enough. Also the level system is worked out rather differently. Each level is composed of a screen and, instead of smooth scrolling, the screen stays stationary and only shifts up when you get to the bottom. After eleven levels you go back to the beginning and start again, taking your time bonus with you.

The timing system works in a similar way to the original, you start with a certain time limit in which to get to the bottom of the screen. If you get to the screen before time then your remaining amount gets added to your allowance as additional time for the next screen.

The score is composed of how much time you have left on your clock, and any bonus scores that you have accrued on your trip down. Otherwise, the game is very similar to Marble Madness in layout and all the fine detail, like the broken ball being brushed up, is all there. However, any differences can be forgiven as this is a construction set...

The construction part of the game lets you edit the screens as much as memory will allow. The editing system is remarkably simple and fully icon-driven, with a two-thirds scale representation of the screen. The rest of the screen is taken up with the icons and chunks of screen to be manipulated. So, you can whizz your joystick around and edit any screens that you may want to make harder, easier, or just different. You can also test screens, and save the entire game to tape.

This section of the program makes the whole game that much more interesting. Long after Commodore 64 owners will have completed the original game, Spectrum (Amstrad to follow) owners will be designing better and more fiendish screens for one another. An excellent variation on an excellent game.