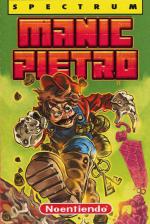 So what happens when you do a mashup of Manic Miner and Pietro, a guy who bears a startling resemblance to someone a lot more famous than Miner Willy? Manic Pietro of course. I'm surprised the video games giant Nintendo didn't rain down on these guys like a ton of bricks and then some to be honest, as they're notoriously quick at shutting down anything that infringes on their IP.

Cristián González, Alvin Albrecht and Einar Saukas previously released the ZX Spectrum games Gandalf (2018) and Pietro Bros (2016). Gandalf received an overall score of 82% by reviewer Dougie Mcg in 8-Bit Annual 2019 publication. Residing in Spain, Igor Errazking is well known in the 8-bit scene, he attends many retro events annually. He is currently a member of Hokuto Force and ex member of Sputnik World and creates many games with the Shoot-'Em-Up Construction Kit (SEUCK) for the C64. His game The Hunter, received first place at SEUCK Game Creation Compo 2016.

This is basically Manic Miner with bells and whistles in a familiar style to the plumber's games, and many others. It even has a cut scene story at the start where Pietro isn't even thinly disguised as somebody other than the famous Italian game character. Controls are identical in style and functionality to Manic Miner as are the block types, objects and exits. Even the familiar Monty Python style boot stomping makes its usual appearance at Game Over.

This game is just as much fun as Manic Miner, maybe more so as it's fresher and has content more familiar to most people around the globe. I feel it's a bit easier than Manic Miner as the level design seems less devious and the routes to take are more straightforward. The level names are shown in the nice little intro to each screen as well as on the play screens themselves.

You'll quickly notice that each is based on another quite famous game, and not always a Spectrum game, ranging from Donkey Kong to Dr. You Know Who to.... Well I don't want to spoil it all for you, suffice to say there's plenty from the Spectrum library and more stuff from The Big Japanese 'N'.

The graphics are impressive and colourful. You could probably tell which game most screens were about without knowing the giveaway title. The audio for the game is pretty good too. The in-game music is a version of The Blue Danube which was the title screen music in the original Manic Miner. The tune does change on certain screens as well. Each introductory screen comes with a brief William Tell overture jingle. The spot effects for jumping and collecting things are also quite colourful. Last but not least there's the bonus of the original Manic Miner levels, which can be unlocked once you complete the main game.

I love the idea that each screen ties into a famous game from the past. I know it's been done before but this game does it particularly well.

The movement of Pietro is not quite as smooth as say Miner Willy. The control is fine. It just doesn't look as nice as it could have.

If you're a Spectrum or Nintendo fan, and you like platform games, you'll probably love this one.

If you're a Spectrum or Nintendo fan, and you like platform games, you'll probably love this one.