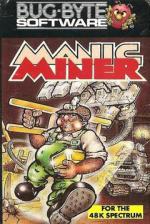 From perilous penguins to ferocious phones, this Bug-Byte game is filled with the most unlikely villains trying to thwart your progress through to the next cavern.

Miner Willy must explore the underground caverns and collect the keys which open the door to the next cavern.

Miner 2049'er, which runs on an Atari, is considered a big game with its twelve screens. Manic Miner has twenty and each is a game in itself!

The designer of this game has come up with some highly original scenarios; my personal favourites include Attack Of The Mutant Telephones and also the man-eating toilets. The bank scene is very clever, but don't get caught by the bouncing cheque!

Although the game is not written for use with any particular joystick, it should run on those which allow the interface to be programmed to use certain keys.

I found the movement keys quite easy to master and have so far managed to reach level four. A secret message awaits you if you successfully complete all twenty levels and Bug Byte promise a prize to the first such person.

Timing is the key to success. Once you have mastered a screen, you will usually have little difficulty in clearing it every time. Some levels, though, take a long time to solve especially as you have to start at screen one each time your three lives run out.

One of the qualities which make a game a winner is whether you'll keep coming back for more. Manic Miner scores well here, as it will take some time to complete.

When the impressive title frame comes up, you are told to press a key to start. If you don't, the game will cycle through all twenty screens giving you a short preview of each.

Manic Miner runs on a 48K Spectrum and is well worth the £5.95 charged by this Liverpool software house.