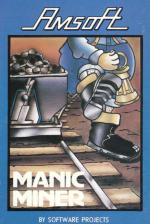 Miner Willy from Surbiton has discovered evidence of a lost civilisation buried deep inside a mine at the earth's core.

Backed by an elaborate musical introduction, the colourful title page is a foretaste of the superior quality of this program.

Scrolling smoothly across the base of the screen is a humorous message setting the mood of the game.

Racing speedily through the many chambers that Willy will visit, the demonstration sequence only serves to confirm your earlier expectations.

Willy needs to collect the assortment of shimmering keys that are scattered throughout the labyrinth, before moving on to the next chamber.

You control Willy's movements either with keyboard or joystick. Adequate instructions are printed on the cassette inlay.

Manic Miner is now available on most micros and thankfully this conversion incorporates all the sophisticated graphics and sound commands specific to the Amstrad.

Watch out for the manic mining robots and lots of other nasties who are out to get you. Not being a master playet, I saw lots of "Game Over" screens, and was prompty stomped on to boot! Hilarious family fun.

Hilarious family fun... Not being a master player, I saw lots of "Game Over" screens, and was promptly stomped on to boot!