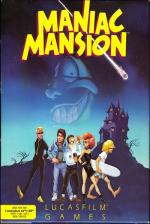 The inhabitants of Maniac Mansion, have started to behave very strangely following the crash-landing of a meteor in their back yard. Head of the household, Dr. Fred has developed megalomaniac tendencies and vowed to take over the world - one teenager at a time.

The player takes the role of Dave, a typical American kid whose cosy life is suddenly interrupted when his pretty girlfriend, Sandy, is kidnapped by the evil Doctor. He plans to use her in his vile experiments, the first of which is to suck her brains out! Dave, being a goodly sort, decides to visit the Mansion at night and rescue his sweetheart before she gets sucked senseless.

Before the adventure begins, two of Dave's friends are chosen to accompany him on the mission. Six chums are presented, each with different abilities and weaknesses which are only discovered through experience. These individual characteristics, and how they are applied during play have a significant effect on the mission's outcome.

Having chosen two party members, the house is approached. The adventurers are controlled one at a time, with the function keys used to change between the three members. This individual control method allows the party to split up in traditional B-movie tradition and explore the mansion.

The horizontally scrolling main display shows a side-on view of the currently selected adventurer. Below is a message screen and text area which contains a list of verbs and all the items in the character's inventory.

Commands are entered using a joystick-controlled cursor, and involves placing the cursor on the verb required, (such as 'unlock'), moving it onto the required object on the main display (such as the door) and finally (if necessary) on the inventory item to be used (such as 'key'). The message screen prompts 'unlock door with key', and the action is activated by pressing fire. Fortunately, the parser is intelligent enough to supply prepositions for appropriate verbs. The character often offers advice, the message screen displaying his or her reactions.

Occasionally. the action cuts to show a cameo scene happening elsewhere around the house - sometimes the Doctor muttering snatches of his plans, or another member of the household wandering around.

To complete the mission, all three members of the party and Sandy have to be guided to safety, and the evil machinery in the basement disabled. Can it be done or is the Doctor going to take over the world?

Really good arcade adventures have been in short supply recently - so this is very welcome. Maniac Mansion's scenario is very reminiscent of the Rocky Horror Show, and it packs a similar sort of spooky and zany atmosphere. Throughout the adventure there are both visual and aural clues to help you along - but the real way to progress is through experimentation.

There's plenty of interaction, with loads of different things to pick up and explore. The control method is a doddle to use, and makes the action incredibly easy to get onto. If you're an arcade adventurer with a disk drive looking for entertainment, stop off at Maniac Mansion and look around.

The packaging on Lucasfilm's latest is drab to say the least, but the game is far from that. After a suitably spooky introductory sequence, the action quickly gets into full swing. Maniac Mansion feels very much like an interactive Scooby-Doo type cartoon, and I particularly like the way that the game 'cuts' from scene to scene to show the evil plotting of the mad Doctor.

The humour works well - read the notice on the nuclear reactor in the basement and it says 'Made in Chernobyl'! The characters are pleasantly animated and all the locations are neatly presented, with plenty of clever touches and sound effects - especially the scratchy old record on the gramophone. The unusual menu system is easy to use and progress is initially easy, but Maniac Mansion will certainly take a fair amount of solving - anyone with adventuring tendencies and a disk drive should go straight out and get it.

If you've ever thought that the arcade adventure genre was getting a little tired, take a look the latest product from Lucasfilm and think again.

Maniac Mansion combines arcade action, visual clues, perplexing puzzles and a great sense of humour to create one of the best arcade adventures I've seen. The control method is incredibly easy to use, and guiding the three intrepid explorers around the mysterious residence is highly enjoyable.

Discovering new locations and objects is always rewarding, and some logical thinking is required to progress deeper into the adventure.

The player interaction is tremendous, and gives the action a wonderful feel. Although the graphics and sound don't push back any barriers, they work together perfectly to create a believable, almost film-like atmosphere.

Maniac Manson definitely ranks as a 'must buy' - it's a shame that it's only available on disk.

Sound 79%
Not outstanding, but the effects help to create a wonderful atmosphere.

Hookability 93%
The excellent control method makes the adventure easy to get into, and the action is addictive from the start.

Lastability 86%
When the adventure is solved, return to the mansion with a new gang.

Overall 93%
An innovative and polished arcade adventure which shouldn't be missed.

An almost film-like atmosphere... An innovative and polished arcade adventure which shouldn't be missed.