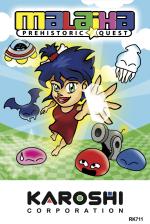 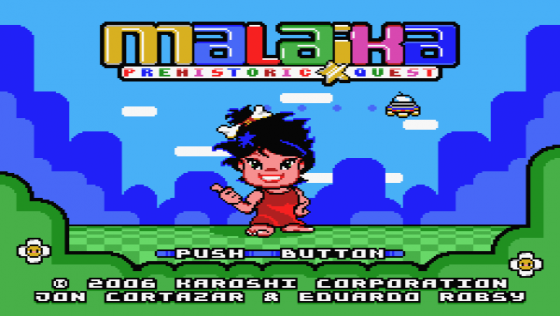 Originally released last year as an entry in the MSXDev'06 competition, Karoshi Corporation's Malaika - Prehistoric Quest is a slickly presented, classic-style run 'n' jump platformer for the MSX range of machines, Microsoft's 1980's forray into the home computer market. Although I'm not particularly fond of the genre, Malaika immediately drew me in with it's lush, colourful graphics (enhanced on the MSX2) and cheerful AY chip music. With super-smooth scrolling and fast-paced game-play, it's no wonder that Malaika achieved second place (out of a total of 19 entries). However, it's also clear what held it back from actually winning - unfortunately the game suffers from a major lack of originality...

You see, Malaika is clearly influenced by the Super Mario/Great Giana Sisters games, although unfortunately it lacks the power-up's that made those titles stand out from their peers. It's also considerably harder than most platformers, requiring accurately timed, pixel-perfect jumps and offering the player no mid-stage check-points - if you fall off the screen then you'll have to start the level all over again. Similar to Issue #01's Crownland, Malaika is clearly aimed at experienced run 'n' jump players, which unfortunately excludes me.

Although I was unable to progress any further into the game than beyond the first few stages (I really am the suXx0r when it comes to platform romps), it's clear from the level of polish present that a huge amount of work as gone into creating Malaika. The six distinctly different worlds (each several stages long and with unique enemies) and boss encounters give the game enough variety to maintain the player's interest, and Karoshi Corp. have done a commendable job in giving the game a halfway-decent plot. 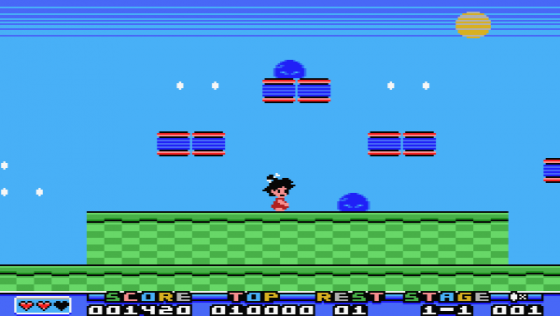 To summarise, Malaika is essentially a great addition to the MSX library that both is instantly playable and professionally presented (and indeed better than many commercial MSX releases), but sadly there's nothing original about the game-play at all. It would have been nice to see the implementation of more power-ups and collectables (other than energy, extra lives and invincibility) and the lack of any real reward for collecting all the gems seems like a bit of an oversight - it's hardly worth the effort of collecting all 100 per stage if it just gives you a fat bonus score, the addition of unlockable bonus rounds or extras would have given Malaika far greater depth and lasting appeal. These slight flaws aside, Malaika is a testament to what is achievable by homebrew developers on the humble MSX and as such I look forward to seeing future developments from Karoshi Corporation.

(Note that since typing this review I've been in contact with Karoshi Corporation, who've stated quite clearly that the game can only be downloaded from their website (or via MSXDev), and hence we are not able to provide a copy on disc. However, the good news is that they are currently revamping and improving the game with the intention of giving it a hardware (cartridge) release in the near future. As a result of this inspired development I've addressed the formerly low concept score - well done Karoshi Corp!)

I'm not too sure how this game has managed to score in excess of 70% when considering it has major flaws. This game isn't just slightly influenced by another title; it's practically the caveman equivalent of Super Mario.

If you manage to see past the fact that there's been little effort to create anything other than a Super Mario game, you can appreciate a few things about it. The graphics are one, as James says they are lush and colourful and its obvious time and effort has gone into creating the title (which might provide you with some fun) to run on the MSX platform.

Still, apart from the few good things about the game, it's hard to get over the heavy lack of originality and the frustration caused by the poor jump mechanism. It seems very unresponsive, especially when close to edges. The problem with that is the fact that most of the holes in the ground are only make-able if the jump is performed very late. This will lead to death often. It's also just a bit annoying controlling the slow bone-head Neanderthal.

Some will definitely find it fun, but I shouldn't think that many will play it to completion. It's quite well made, but irrevocably prehistoric.

Very unresponsive... It's hard to get over the heavy lack of originality and the frustration caused by the poor jump mechanism. 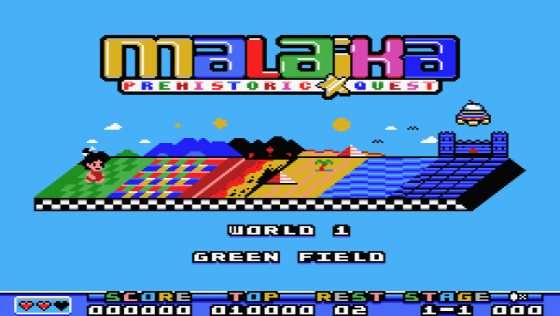 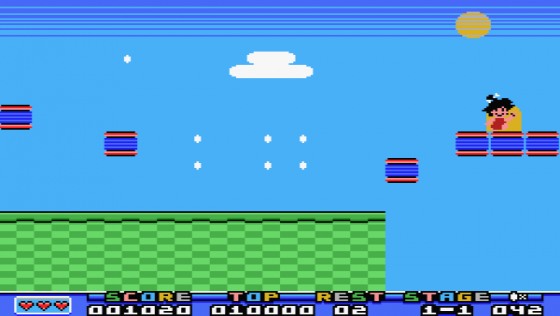