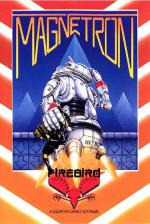 Call it a sequel and you'll end up flat on your batteries. Magnetron is a follow-up-in-concept to Quazatron, Steve Turner's last game, which itself owed a lot to Andrew Braybrook's Paradroid. But Magnetron is different enough to take it into a different class, packing so much into 48K that the Spectrum bulges at the seams.

Droid hero KLP2 is transported to a series of eight space platforms, under instructions to shut down their reactors. If you're at all surprised to hear that this task is complicated by hordes of heavily-armed guardian robots, then you obviously haven't been paying attention to the 'manual of standard computer games plots'.

Fortunately the game is twelve thousand times better than it sounds. The graphics routines have been completely re-written, the screens now flipping instead of scrolling, which means that the movement of the droids is even smoother. The backgrounds usually feature two colours, which contributes to the 3-D effects. Each of the eight levels consists of sixteen screens arranged in a four-by-four grid. The slopes, causeways and ramps are similar to those of Quazatron, but scattered around them you'll find computer consoles and reactor entrances which are your main objectives.

Reaching a computer console and logging on (just by standing still and pressing the fire button) will give you access to three screens of information. The first tells you the status of the reactors on the current level, the second lists the types and capabilities of the droids in the area, and the third (which you can only access if your droid classification is high enough) describes the weapons available to you. Your first task, then, is to pick out a weak droid, then return to the game screen, identify the droid by its code number, and Grapple it (Oo-er!)

This leads you into a fiendish sub-game in which you must solve a sort of sliding block puzzle by nudging three rows of symbols into the right place Big problem; you only have ten seconds to do it before your target explodes. If you succeed, the target droid becomes a back-up, so that if you die you are transferred into its chassis.

Always have a back-up ready, you never know when a sudden fall or a vicious cross-fire will drain your energy and destroy your current droid. If you don;t want to take over the new droid - if, for instance, its weapons are weaker than your own - you can just takes its energy and disarm its bomb.

Roaming the levels blasting or grappling droids is all very well, but your aim is to reach the reactor screens. Here you have another sub-game, ridiculously simple really, in which you have to balance the positive and negative isotopes in the reactor in order either to shut it off, or to overload it. The catch is that the left-over isotopes are carried away with you, and then affect your performance. Their weight slows you down, and their magnetic charge (so that's why it's called Magnetron...) causes you to be attracted to or repelled from certain areas of the floorway (so that's why it's called Magnetron)!

The trick, then, is to take over the correct droid to give you the weaponry needed to defeat the guardians, pick up the right isotopes to allow you to complete each level without being pushed off ledges by magnetic forces, and to shut down all the reactors and make your way through the darkened level to the transport pad to the next level.

There are some great weapons available, including a flying disc, a boomerang bomb (watch out for the returning flight!), a bouncing bomb and a round-the-corner shot. You'll find that powerful, slow weapons are pretty useless against weak but fast droids, so choose carefully if you don't want to be battered to bits by gangs of softies.

Quazatron was an SU Classic, so Magnetron must be a Classic Plus. The gameplay of the main section is more exciting than most programmers could come up with, but both the addition of the sub-games and the complexities of the strategy necessary to complete all the levels make it even zippier. It will be great to see Steve Turner coming up with a brand new game concept, but for the moment Magnetron will keep you happy whether you like a good think, a good blast or a good plot.