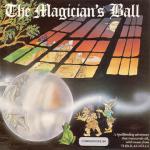 Many an argument has been heard in this hobby on whether adventures should include graphics or be text only. The usual argument against graphics is that the pictures use up valuable memory, take a long time to be drawn and add nothing to the game. In fact it is said that including graphics precludes good atmospheric room descriptions and therefore spoils the adventure. Magician's Ball will add fuel to the debate as not only does it have good room descriptions, it also has meaningful graphics and music as well.

In the adventure you play the role of Caro who enters a fantasy world to rescue the king's daughter from an evil Magician. Unfortunately the Magician has powers that include size changing and teleporting as well as a ring that can turn people to stone. Consequently, you will have to use your powers of deduction to avoid his traps and finally defeat him.

During the adventure you meet other characters that you can become which helps you to solve problems that Caro can't handle.

The game accepts quite involved commands such as Throw Hammer Through Window which can be repeated and edited by pressing the C64's arrow key. This can save you a lot of unnecessary typing and speed up the game.

Your commands and any consequences that result from them are displayed in the bottom half of the screen and above that a picture of your current location and a text description.

The graphics appear almost instantaneously and many of them are animated (for example include a flickering flame). Some even have sound effects. For example, leaves rustling in the forest.

The accompanying description is better than the usual "You are in a room. You see nothing." type and add a lot of atmosphere to the game. For example in a barren wasteland "Flames and gasses belch from the cracks in the soil". Or a boggy marshland contains "stagnant pools of water that lie silent and inert. They reflect the clouds in their dusty surfaces".

Obviously the text provides the game's atmosphere but the graphics can give you a quick impression if you haven't time to read the text. When you're being chasen by a goblin, is such an occasion.

If that wasn't enough, while you adventure, you can hum along to a digitised version of Mike Oldfield's Tubular Bells. Spectrum and Amstrad versions are set to follow shortly with the Spectrum version featuring a three-voice sound synthesiser.

The graphics appear almost instantaneously and many of them are animated (for example include a flickering flame). Some even have sound effects.