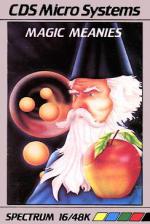 This game is a good copy of an old arcade favourite, on the whole a not much copied game as yet. Blaby did a version, called Gold Digger, and in most respects this is very similar, although it boasts a rather splendid continuous music sound track.

The object of the game is to control your little wizard Meltec through underground caverns which he himself creates as he goes. Dotted about are lumps of lead, resembling blue diamonds, which are to be collected for points. There are also red apples (underground?) which can be pushed along an existing tunnel and made to squash the meanies by dropping them down a shaft, or one can be used to block a tunnel by undermining it. Meanies can also be killed by firing one of your five crystal balls at them. Killing meanies adds to your points. There's also a cherry on each screen which must be collected.

This goes wandering about the place in a most distracted, not to say distracting manner. Clearing a screen of lead and cherry takes you on a level to more meanies.

Cutting out the story of wizards good and evil and dark ages when they spent their efforts obtaining lead to transmute into gold, which sounds like an adventure game, Magic Meanies is an arcade game. It's only a reasonable game, but it's fun to play.

The graphics are quite small, one-character size and they move quite jerkily, but they are called on to do very little, since much of the game's attraction lies in the skill and quick thinking required. Once on the move your man can only be stopped by running up against an apple, or by constantly reversing his direction. It's a simple game but manages to be addictive in playing. Nice, bright colours, and an insistent and continuous music track that can be turned off if it's driving anyone else mad!

Despite the simplicity of this type of game, it isn't easy to play, requiring quick reflexes. C.D.S. have also provided nine playing speeds as well as rising skill levels. At the slowest speed the game can become a bit repetitive, but at medium fast it is quite demanding. The highest speed level Is sheer madness. Fairly addictive, and a good version.

At the slowest speed the game can become a bit repetitive, but at medium fast it is quite demanding.