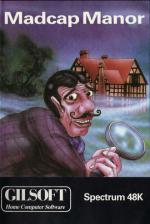 Gilsoft, publishers of The Quill and Illustrator, also produces its own-brand games. Madcap Manor is one of the new adventures which offer a graphic game on one side and an expanded text version on the other.

It's 1933 and you are cast as the famous Belgian detective. Inspector Le-Gles - oww! As befits such a personage you've been invited as a house-party guest to Madcap Manor, the stately residence of Lord Algernon Stingy - and boy, is he mean. It even costs money to play billiards at his posh gaff.

The action begins, naturally enough, with Monsieur Le-Gles strolling down to breakfast after a good night's kip on a feather bed. He meets his distraught host who tells him that the Dowager Lady Ditchley's giant ruby ring has been stolen during the night. Gallantly Monsieur l'Inspecteur accepts the challenge.

Thus you begin your exploration of the Stingy mansion in true Agatha Christie style. The place is vast and contains servants' quarters, cellars and secret passages as well as the main apartments and spacious grounds. One secret route will only be found if you can assemble all the necessary equipment - and aforementioned finance - to play a very poor game of billiards. As the interpreter says 'a proper little Hurricane Higgins, aren't we?' Make sure you go for the big score and pot black!

It soon becomes apparent that there is more going on at the Manor than meets the eye. The long-lost Amazonian explorer, Horatio Stingy, has a finger in this pie, as you'll discover if you ring for a servant from the summer house. A Jivaro Indian will appear to give you advice. Other servants and guests can be summoned or encountered and there's a living Cluedo feel to the play.

The game is "Quilled", of course. The graphics, done with The Illustrator, are pretty good and the cellar pictures quite moody and atmospheric, as are some of the splendid bedrooms and drawing rooms. Once you've had a look at those you may want to try out the plain text game. That has more detailed description and is slightly fuller, with added locations.

The house and its grounds are fairly open to exploration - obviously excepting the secret parts which you'll have to discover by trial and error. Be careful not to miss opportunities - I dithered when a wall slid open and it shut before I got a chance to get through. Saving regularly helps in those situations.

There's a vein of silly humour running through the action and the interpreter's responses are lively and occasionally cheeky. That encourages you to persist and make progress in a friendly and cheerful way.

Madcap Manor, then, is an entertaining and well-constructed variation on the detective theme. I like the idea of having two versions of the game as you end up having your cake and eating it too, if you feel like it. Nice one, Hercule.

An entertaining and well-constructed variation on the detective theme.