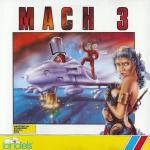 French software firm Loriciels decided that it wanted a soft and sexy female voice to purr "Get ready" at the start of its 3D style shoot-'em-up - Mach 3.

Stumped as to where to find one, the designers set out for the Follies Bergere, where they find a topless dancer who agrees to have her suitably sensuous vowels digitised for the game. The firm's UK office cannot come up with a name to go with the voice so I have decided to call her Fifi.

The action in Mach 3 has nothing much to do with Fifi but concerns the misfortunes of another unfortunate French girl - Gwendolene who is being held prisoner by the mutant sorceror Sfax.

Step up one hunky young space cadet and zoom off to beyond the "portals of space" where you can knock to confront the evil one.

Fifi's "get ready" message may remind you of Space Harrier and certainly the whole solid 3D feel of the graphics together with their bright colours bring the Sega game to mind.

When you finally confront Sfax at the beginning of the second level the similarities to Space Harrier appear to be more than just coincidental. His face appears in front of your ship, ducking and diving to avoid missiles. His mug shot is also shown in the information panel at the top of the action panel at the top of the action screen. Every time he sustains a hit, he grimaces until his face turns into a dying, skeletal, hollow-eyed mess.

Another similarity to Space Harrier is the way in which your ship skims the surface. It is a case of hurtling forward, blasting like crazy and dodging whatever nasties you cannot waste.

Every so often you will need to swoop into the air to take out the formations of Sfax's fighters sent into space to stop you.

The ship's flight is very impressive - if a little difficult to control. It sweeps into the air at great speed and at a very steep angle, as if a gust of wind is rushing up under its wings and forcing it like a power-glider into the air. This gives the effect of the ship swaying all over the screen at great speed - and it will take good practice to master aerial combat - novices are advised to stay on the surface.

Bonus points can be earned by flying through the goalposts that appear in rows of four at regular intervals.

To progress to a new level and have another blast at Sfax himself you will need to successfully fly through one of the black portals.

As you can see from the screenshots above, the graphics in Mach 3 are exceptional and they lose nothing in the animation either. But the real strength of Mach 3 is the sound effects and digitised speech.

The explosions and sound of missiles being launched are convincing - especially at maximum volume. Fifi's repertoire is also fun. She says "Game Over" as if she were inviting you in for a cup of coffee, and announces the high score table with an "Oh Boy" squealed an octave higher.

There is a question mark in my mind about the lastability of Mach 3 which, considering the £20 price tag, should be treated seriously.

I played the game for several hours without destroying Sfax but I did get the impression that it would not take me that long if I really put my mind to it. A very strong shoot-'em-up without doubt - but I for one would feel a lot happier buying it without such a hefty price tag.