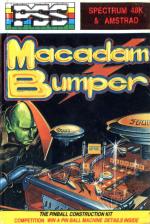 This is a pinball game. I say this because the title doesn't really say a lot about the game - nothing about what it's about anyway. The loading screen is a bit more explicit, a full colour cartoon of a punk playing a rather sorry looking pinball table.

Options abound in this game from redefining the keys to whole table redesign. The initial table is a bit odd to play with, having *six* flippers! But the two designer screens are very good, you can change the point values of the various bumpers and targets, and the actual table design screen is very good.

All the bumper and flipper symbols are to one side of the screen with all the keys associated with them. The crosshairs are then moved with the cursor keys to manoeuvre around the screen and position all the various bits and to draw out the shape of the table. Nothing is impossible.

Tables can be saved to tape for later use and there is a competition for the best table sent into PSS with the winner getting a real table as a prize. Though it doesn't seem possible to keep a number of tables in memory at one time and to switch between them.

The tape is supplied as Spectrum/Amstrad game with one version on each side of the tape, which is good news for retailers, having to keep less stock lines. Though I haven't seen the Spectrum version yet it seemed to be similar to the Amstrad game.

Overall, this is one of the better pinball construction sets around.

One of the better pinball construction sets around.