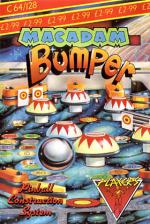 Yes, it's another flippin' pinball game. And this one's so old it missed a Zzap! review. Now, how do I describe the gameplay? Erm, well it's sort of pinball-ish with pinbally overtones! You know the score: stop the ball from going out of play by flipping it with your flippers. You can also tilt the table left or right to subtly alter the path of the ball - but don't do it too much or your flipper will stop working.

The main difference with Macadam Bumper is that it incorporates a table designer. Using this, you can stick loads of bumpers and flippers etc on your table, even decorating it with your own line drawings. Tables can be saved for later use (there's only enough memory for one table at a time).

Unfortunately, I found the designer very cumbersome: selecting and moving everything via cursors, it takes ages to create a decent table.

As for the 'action', it's mind-numbingly boring, with a total lack of any exciting special features; almost as bad as the pathetic Spectrum-emulating graphics and beepy sound. Players must have totally flipped to bother releasing such a load of old... pins.

Players must have totally flipped to bother releasing such a load of old... pins.