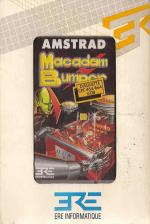 Pinball has always been a popular game for converting to micros although most pinball wizards would rather have the real thing. Computer versions have often suffered from unrealistic ball movement or bad table design but this offering from France has no such problems.

The game comes with its own designed screen and a score table on the left. This has a scantily clad lady on it (or a naked one if you buy the naughty version by mail order) and score counters for four players. There are also bonus lights for extra balls and specials.

The initial screen has stacks of features on it with three pairs of flippers (one pair on the upper half of the screen) and the launcher on the right. You have left and right flipper controls as well as left and right jolt controls for when the ball is headed straight off the table. Other features include the usual circular 'thumpers', elastic-sided blocks, spring-loaded holes and targets. The targets are your main method of scoring and when you knock them all down you get large bonuses depending on how many times you do it. Up to four players can play and each one gets five balls with which to try to earn a high score.

If you tire of the starting layout you can modify it or create your own masterpiece. The first things you can change are the parameters and values of the table features. You can determine the slope, elasticity, speed, tilt sensitivity (don't jolt too much!), and stroboscope. The last of these makes the ball disappear at intervals so that you are playing blind. You can also change the values of the various scoring obstacles, the bouncing force and when the bonuses are given.

After that you can change the actual layout of the table or create a completely new one. You can put in or remove any of the standard features and alter their colours to suit your taste. Holes, flippers, thumpers, lines, targets, bumpers and a drawing capability are all there. Once you've designed the table you can save it for later use or as an entry in PSS's competition to win a real pinball table.

The ball nips around pretty fast and smooth with speedily reacting flippers. The initial layout is a good one with no traps but plenty of high scoring possibility if you've got the skill and flipper timing.

Despite the lack of physical effort, pinball can be an enjoyable game on a micro. PSS's French import is certainly the best available on the Amstrad - the ball behaves very realistically and, as long as you're not distracted by the picture of Fifi, you should get a decent game.

N. Even with screen design, it's a one-screen game.
N. Pinball may have a limited appeal.
N. There's always that element of luck in the bounce.

Ball movement and table features are realistic, although pinball may have a limited attraction, even with the naked Fifi if you buy the naughty version.