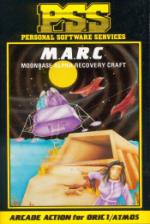 M.A.R.C. is one of the few original space shoot-outs I've come across. There are five cities on the moon, each housing two scientists. They're under attack from bombers and heat-seeking bugs. If a city is destroyed, the scientists flee into the open and wait to be rescued.

At this point the enemy attempt to carry off the boffins. Bouncing men appear and if they bounce above one of the scientists then they carry him up into space to destruction.

Meanwhile, my friend, you have not been idle. Having landed and refuelled aboard your mothership, you have been in hot pursuit of the opposition, blasting away on your laser.

The action takes place above a 3D landscape, which means that not only must you be at the same height as your opponent, but you must also take depth into account as well. The relative positions of all the battling ships are shown by small shadows that they cast on the ground below.

Your immediate concern is to rescue the scientists by lowering a ladder to them, which they scramble up. You must then ferry them to the mothership. The problem with M.A.R.C. is one of control. In order to move you need left, right, in, out, and thrust controls. Unless you keep the thrust handy you'll succumb to gravity and crash.

Luckily PSS have given you the option of defining your own keys. The best solution is to define one key as both fire and thrust which means you use a lot of fuel but at least it makes the game playable.

Graphics and sound are both well-handled in this game which, despite scoring rather low on playability, remains an exciting challenge for the nimble-fingered.

Graphics and sound are both well-handled in this game which, despite scoring rather low on playability, remains an exciting challenge for the nimble-fingered.