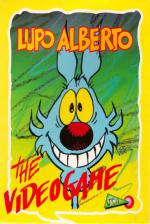 If you've never heard of Lupo Alberto, join the club! He's actually a famous Italian comic-strip wolf, a member of the weird McKenzie family - a group of various farmyard animals including Alberto's inamorata, Marta The Hen. This rather unusual wolf-chicken relationship is opposed by another family member, Mose The Guardian. So what Alberto and Marta want is a quiet place where they can be alone together and they go in search of a suitable lovenest. What they'll actually do when they find one is anyone's guess!

In solo mode, you get to control either Lupo Alberto or Marta - or get a friend to join you for some simultaneous wolf and chicken action. This is platform jumping at its simplest as the doting duo journey through ten multi-directionally scrolling levels. Other farmyard animals must be avoided as they remove one of your character's four lives on contact (as does falling down a chasm). However, they can be jumped onto to knock them off the bottom of the screen (some animals require several jumps). When this happens a bonus is sometimes revealed: these include superspeed, superjumps and a weapon to shoot animals with. Points bonuses can be collected in the form of fruit which are thrown out when some platforms are touched.

That's about all there is to it, really. The two-player mode is quite fun, but the similar CJ's Elephant Antics has tons [Groan! - Ed] more action and playability at budget price. It's a pity the comic's other farmyard characters haven't really been used at all - surely there could have been more interaction with them than just jumping on them?!

One nice presentational idea is that completing a level reveals the last picture of one of the cartoon strips in the back of the instruction manual. Unfortunately this small, monochromatic pic is not much of a reward. Worse still, the levels all look very much the same, providing little incentive to continue playing.

Created eighteen years ago by Italian artist, Silver (real name Guido Silvestri), Lupo Alberto has many farmyard friends which appear in the game:

Mose The Guardian: A bear who believes in the natural order of things and is therefore totally against Alberto and Marta's love.

Krug The Bull: Bad-tempered and headstrong.

Alfredo The Turkey: A 'jack of all trades', doing many different things.

Enrico The Mole: A unique personality.

Osvaldo The Rabbit: He likes to do what rabbits do best.

Alcide The Pig: An intellectual philosopher...

Mario Bros.-style gameplay with a hint of Rainbow Islands sums Lupo up, but it lacks variety in gameplay, challenge and graphics. Short-term fun can be had with the dual two-player mode but in all honestly I was never that excited, especially with the multi-load.

Anyway, the Italian humour loses something in the translation, especially when it's in the form of badly pixellised 'punchlines' at the end of a level). A good mapping game, though, and that's a fact!

Graphics 38%
Okay cartoonesque sprites, but the levels all look the same.

Hookability 48%
Simplistic action with lots of bonus fruit to find.

Lastability 32%
Soon gets repetitive, even in two-player mode.

Heavy multi-load and okay cartoonesque sprites, but the levels all look the same. It would have made acceptable fare on budget.